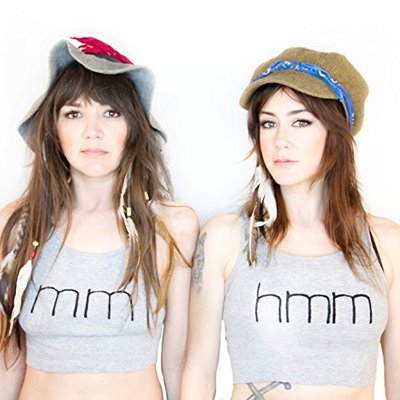 mmhmm’s debut album is a unique project to say the least... comprised of Hannah Fairlight and Raelyn Nelson, a couple of Hee Haw Hotties who make sweet and sassy music.

Raelyn Nelson is a Nashville native, and granddaughter of living legend Willie Nelson, but this Nelson is far from a cookie-cutter artist. She’s forging a path all to her own: part Loretta Lynn part Joan Jett. She brings a freewheeling’ aspect to her music and stage presence. Fairlight is a Midwest girl with rock and roll chops (or chaps). She held a lead role on A&E’s Crazy Hearts: Nashville and was recently cast as “Veracity” in the latest installment of the Pitch Perfect film series.

Together the duo radiates a mischievous charm and are as feisty and entertaining with their fresh set of songs from their debut. Combining honeyed voices and sweet acoustic tones with thought-provoking lyrical material, the two create an interesting, unique, and wholly enjoyable musical experience.
The twins/not twins open the album with their take of “Let’s Get Together,” a song written by Robert and Richard Sherman for the 1961 Disney film The Parent Trap. It was sung in the film by then teen actress Hayley Mills, a tricky and fun introduction to the musical marriage that is Nelson and Fairlight, (but I wonder how many people will miss that and think it’s an mmhmm song.) The girls kick it in with their original material, the song “Aw Hell,” filled with tasty vocals and lyrical wordplay, followed by an acoustic rocker “Number Song.” All and all the duo takes you on a fun-filled yet lyrically stimulating journey with songs like “Earn My Love” and “Coy Boy,” and then there is their super fun take on REO Speedwagon’s “Take It On The Run.” Ending the 13-song set with my new favorite break-up song, “So Hard To Say Goodbye,” as they sing “See you later alligator, after a while crocodile, I’m sick of dealing with your shit.”

What really separates these girls from the pack? They are a genre-twisting twosome, with their original sound of roots meets folk meets pop meets Americana meets country, meets cow punk. For whatever they choose to sing, Nelson and Fairlight can engage an audience simply by the way they blend their voices so effortlessly and eloquently and the between song banter in both the live show and on the album that is usually reserved for sister or sibling pairings, but these two twins are not twins and instead deem themselves “Breast Friends.”

With catchy melodies, pretty harmonies, Fairlight on acoustic guitar, Nelson on ukulele, both donned with chaps, it’s no wonder that the pair have been voted the “Cutest band around” by local Nashville publications and now they are poised to spread that cuteness to the mass. Oh Papa Willie... you should be proud.