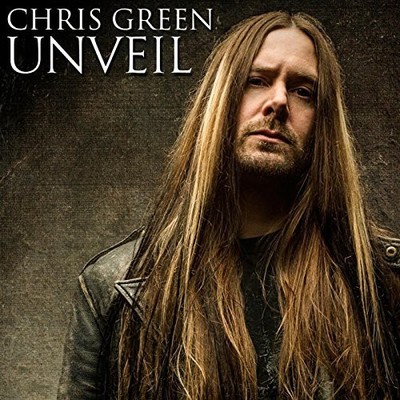 Chris Green is a heavy rock guitarist whose extensive CV includes stints with Tyketto, Burn, Furyon, Rubicon Cross and Pride. For his first major solo offering he has released an instrumental EP entitled 'Unveil'. First of all you should put out of your mind the type of self-indulgent solos guitarists usually trot out at concerts, all unnecessary notes and tunes extended up to and beyond breaking point. Green is someone who understands what the guitar is capable of and he proceeds to show it in no uncertain terms.

The EP starts with ‘Once Forgotten’, a driving rock track that blends together an incendiary drum beat with a superb melody and Green’s virtuoso playing. In parts it sounds almost Baroque with a classical style interlude before the tune moves into new areas that include Hendrix level solo work and times where the guitar moves in to the background as the drum takes centre stage. At no point does the tune stand still which is the secret of the successful instrumental and it’s a great start to the EP.

‘Remember’ starts off with a prog style guitar that immediately contrasts with the heavy first track and moves dreamily along in to an ambient soundscape that really draws the listener in and takes advantage of much softer backing to create a genuinely hypnotic track.

‘Undefeated’ starts off with a futuristic rumble to which Green steadily introduces the guitar which gets louder and more insistent. There are shades of Europe in the guitar playing, and as a huge fan of the Swedish masters of rock I mean that as high praise. This is the type of music that would sound incredible live as it reverberates round a concert venue and draws the listener in to its world of electronic music that pushes the boundaries of both forms.

‘Unveil’ is a more traditional style guitar track that moves through the gears to showcase Green’s incredibly quick playing style. This track, as it progresses, reminds me of legends like Led Zeppelin but in no way does it sound outdated. It brings 70s sensibility bang up to date and is the fourth stylistically individual track on the EP which is no mean feat with an instrument that can sometimes encourage conformity even from its maestros.

‘Welcome for a Soldier’ has an Iron Maiden style title and fittingly an Iron Maiden style introduction which instantly switches in to a superbly played series of interludes taking in styles, to my ears at least, as diverse as Pink Floyd, Europe, Hendrix and back into Iron Maiden again, before finishing off with another Floyd style section.

This is a seriously brilliant EP for anyone who loves the guitar and wants to hear it used properly. Whether your guitar heartlands are in the 60s, 70s, 80s or beyond you will find something to love hear, but more importantly you will have your boundaries stretched as you listen to what a guitar can sound like in the hands of a truly gifted player like Chris Green. I really hope this EP gets the attention it deserves and is followed up with a full album as this talented guy deserves no less.