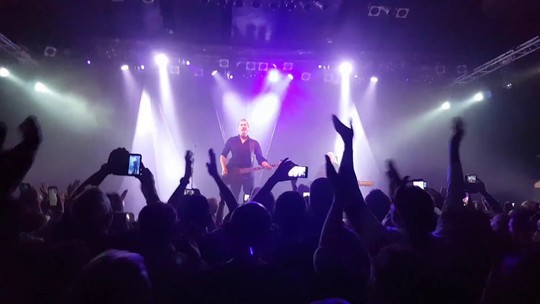 Orchestral Manoeuvres in the Dark or OMD came on to the stage in the slightly incongruous setting of Kent County Cricket Club’s St Lawrence Ground with a swagger, confident that they were going to thoroughly entertain us. They were the support act for A-Ha, but they ended up stealing the show with a fantastic set.

The opening chords of ‘Enola Gay’ were greeted with a huge cheer. Andy McCluskey grinned and said, ‘We’re not going to f*** about!!’ and they didn’t! With McCluskey’s voice in fantastic shape, the old songs sounded fresh as they went for the jugular from the start. The huge cheer at the end of that first song was greeted with another grin and the promise, ‘No art and culture, just singles!’ With a 1 hour 10 minute set those singles just kept coming. ‘Tesla Girls’ was brilliant and ‘Forever Live and Die’ was dreamy as both they and the crowd and the power of the vocals from both McCluskey and bandmate Paul Humphreys just kept underlining what a consummate live act they’ve become. Their two Joan of Arc themed singles quickly followed sounding as fresh as they did in 1982. Then, for me at least, the most gorgeous and affecting synthesiser based single ever, the incredible ‘Souvenir’. It was a track I fell in love with from the first moment I heard it and it’s never lost its appeal for me. Judging by the massive cheer from the crowd as the first notes rang out across the ground I’m not the only one. An absolute highlight of their back catalogue that sounds as good now as it ever did.

As the hits followed each other in quick succession the crowd sang along to each one as the years fell away leaving us in the words of McCluskey as he introduced ‘Walking On the Milky Way’ ‘feeling 21 in our heads’. It is only fair to tell you that as well as being a fantastic singer and a man totally at ease with the audience, OMD’s main man is the most idiosyncratic dancer I have ever seen! He never lost a chance to make fun of his dad dancing as he called it, although I understand from a long term fan who saw them in concert in the early days that he’s always danced like a windmill in a Force 10 storm! When ‘Locomotion’ blasted out it wasn’t only McCluskey who was dad dancing and my wife had to get out of the way when I got a bit too enthusiastic with my moves! It was a masterclass in audience rapport, Scouse humour and showmanship throughout that made this set unbeatable entertainment from first note to last. When someone shouted out for them to play ‘Genetic Engineering’ from the divisive ‘Dazzle Ships’, a great track and album by the way, McCluskey said they couldn’t possibly play all of their singles even if they had five hours!

When the obligatory ‘new’ song, the title track from ‘Punishment of Luxury’ came up he bullishly said, ‘Don’t worry if you don’t know it, it’s really good’ and then proceeded to prove it. Then a real treat for me with a track I never expected to hear, the amazing ‘Pandora’s Box’ from their 1991 album ‘Sugar Tax’ which is a personal favourite of mine followed by the more familiar and commercially successful ‘Sailing on the Seven Seas’. The set finished with their first hit, incredibly from 1979, the Kraftwerk inspired ‘Electricity’ which as my wife pointed out just does not date.

As with any band, the front man gets a lot of the attention, quite rightly, but OMD are the tightest of groups with a fantastic sound courtesy of Paul Humphreys on keyboards and occasional vocals, Martin Cooper on keyboards and saxophone and Stuart Kershaw on drums. As a live quartet they are fantastic with a set of songs they enjoy as much as the audience and it showed for every minute they were on stage.

Thanks guys, you did make me feel 21 again!