A New Talent At Any Time Of The Day 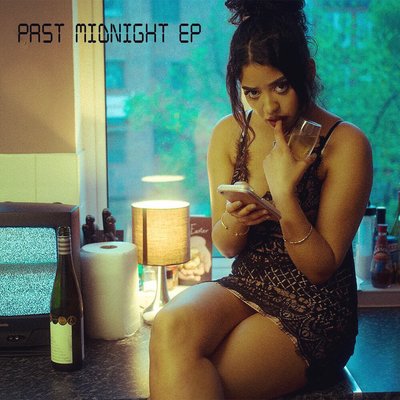 ‘Past Midnight’ is an EP from rising R&B singer Allana Verde. It is a set of four songs charting a night out from ‘12.01’ the first track to ‘6am’ the final track.

’12.01’ sees Verde trying ‘to figure out why my tongue gets tied around you’ when she sees a man in a club. The music is the slowed down chill out music that changes the mood around midnight. Mercston brags about his style in a rap that is fun but adds some darkness as you wonder if he’s not going to see her as anything more than another conquest if she does succumb to his charms. Despite the fact that they are both attracted to each other they end up going their separate ways.

‘2am’ takes a humorous sideways look at the aftermath of a night out as Verde gets back to her house and has to get in through the window having forgotten her keys. She says her neighbour watching doesn’t bother her. She is totally at ease with her life and happy to say that she just isn’t feeling anything for the guy from the club. She knows he’s going to keep calling her but he’s not getting anywhere. The light touch of the lyrics is matched by a more playful, laid back tune.

‘4am’ sees the man, now in the form of Joe Grind, boasting about all these things he’s going to do to her and how she was flirting with him all night. In contrast she doesn’t ‘know his number, don’t even know his name’. All she knows is that it’s ‘4 o’clock in the morning’ and she ‘needs him right now’. It sounds like the drink talking and we wonder what will be happening when we listen to the final chapter. The harder edge to this track reflects the potential for a more dangerous situation brewing with a man she doesn’t even know. It very cleverly puts the listener on edge and shows how well Verde already understands the way that music creates an atmosphere of its own.

‘6am’ has Verde asking whether she can be bothered to get her make up on again and get some more money, but she really can’t be bothered with ‘the man of a thousand calls’ because ‘there’s plenty more fish in the sea’. She wants to be special but he’s looking for anybody and she’s not interested. Mikill Pane comments on her attitude to the mystery man in a kind of voiceover and says he believes her lines but he is so fashionably late he’s ‘haute couture’ and although she’s a ‘Spice girl I’ll be there when I wannabe’! In effect he’s saying that even though she’s beautiful if he was chasing her he would not hurry. She’s now got tired of male bragging so she repeats that anybody ‘just isn’t me’. He can’t just expect to win her over with chat when she knows he’ll be looking for someone else the next night. The track ends confidently both musically and lyrically with Verde showing that she’s not to be messed with.

Musically, this EP is, initially, deliciously jazzy and smoky before it develops a real grime based edge in its sound. Lyrically it is shot through with spiky and funny comments on modern life after midnight in a big city. There’s a clear vibe of girl power across these four songs not confined to the Spice Girls reference in ‘6am’. When you think of late night albums you associate them with smooth love songs like Lionel Richie’s ‘All Night Long’. This isn’t the same genre by any means, but this is every bit as much a late night album dealing with the seedier side of romance when a man tries to turn in to entitlement.

This is Verde’s third EP, and she is a seriously talented singer and writer with an ear for language and music that marks her out as one to watch. With airplay and more tracks in the offing she is going in only one direction and that is up.