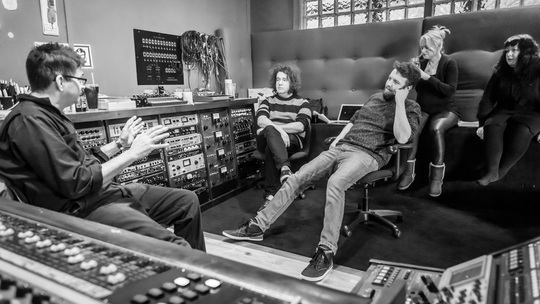 Johnny Marr recently said that he set out to be a completely new type of guitar hero, one entirely free from the cliches of rock music. It's a description that fits Ross Davies of South London four piece Hot Sauce Pony perfectly, even though he wields a very different six string style to the former Smiths man.

Davies' technique is all about carefully sculpted textures, great washes of sound directed through a maze of effects pedals with their blinking LED lights. At times you have to remind yourself you're actually listening to a guitar, as the shifting layers of sonics become sublimely abstract and indefinable. No wonder he performs with a triumphant grin on his bearded face, swaying in time with the band's quirky rhythms.

If that description has set your shoegaze alarm bells ringing, then fret not. Quite the opposite in fact. HSP's music has a nicely brutal edge that's mainly down to their ruthless sounding engine room. Anna Dodridge hits the drums with a mixture of impressive force and a no frills steadiness worthy of the finest Krautrock. When they're locked in with Stuffy's shuddering, juddering Rickenbacker bass, it's like hearing a hardcore band applying the laws of dub reggae, with its emphasis on space and groove, to guitar music.

The line-up is completed by singer Caroline Gilchrist, standing tall at the centre of the stage in drainpipe jeans and high heels, her voice soaring with ringing clarity above everything else.

The foursome recently traveled to Chicago to record with Steve Albini of Pixies and Nirvana fame, and on tonight's showing the forthcoming debut album is going be quite a corker. They play 'Burnt Ends', currently the only officially released song from the sessions, roughly half way through the set and it careers along with a gloriously drunken swagger with its tilting ¾ time signature. 'What You Don't Know' is another clear standout, Stuffy adding some humoursly hysterical backing vocals about an unwelcome house guest who's apparently impossible to dislodge. All over a spiky, jagged groove that descends into grungy powerchords here and there, it verges on chaos but holds back thrillingly inches from the brink.

They close with what is their most straightforward and direct effort, their speedy garage rock single 'Fenced In'. Caroline Gilchrist comes into her own here, railing against the social apartheid of gated communities and the class divide they create. “I'll take my chances,” she sings at its conclusion, “don't want to be fenced in.”

It's a great punctuation mark on which to end a set that is full of tease and suspense, and it's greeted by full on cheering and unbridled enthusiasm from the assembled throng.