I’m So Quornsome I Could Cry 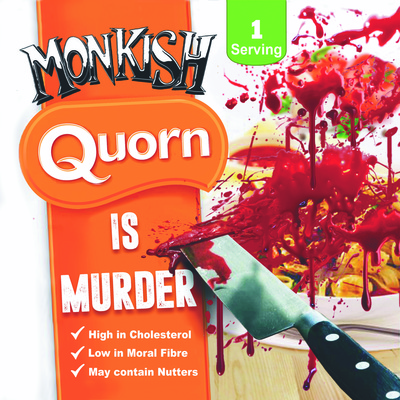 Formed in London in 2005, Monkish are self-proclaimed ‘punk cabaret’, but not of the obvious kind with Weimar leanings. Their YouTube clips show five costumed but geezerish guys from the Dickensian backwater of Gravesend, on-stage having a ball, rather than making a profound intellectual statement.

On this, their second album; their overall theatricality is immediately gleaned from their comedic Derek and Clive-mannered lyrics which portray both the nostalgia and brokenness of dreary endgame Britain in one fell swoop, mainly through the bottom of a beer glass.

Yes, the arresting album title is an obvious tongue-in-cheek homage to the Smiths’ seminal second album. However, they are more closer in spirit to those anarchic contemporaries of Mozza and co., Half Man Half Biscuit, with an obligatory nod to key punk/new wave influences: Bad Manners, the Vibrators, Johnny Moped, Eddie and the Hot Rods, et al; many of which they have supported. A shrewd move for creating their required audience demographic.

They are brilliant musicians to boot. Axemen Juno Waramien and Mikey play shimmery guitar lines by way of the Clash’s ‘Clampdown’ coming to a democratic agreement with the Beatles’ ‘Revolver’ and early R.E.M., which schizophrenically compliment vocalist Brad Frugal’s estuary interjections.

The blatantly un-PC songs and their titles (‘OCDC’, ‘Diabetic Lover’) speak for themselves. They are empathetic to the hilt as if the Buzzcocks’ ‘Something’s Gone Wrong Again’ inspired an analogue-era prime time TV series. Kitchen sink situations - that wouldn’t strike a chord with the blue blooded - are humorously depicted. ‘Man At The Top’ is all about encountering a frozen man in the supermarket as if he is rendered helpless by his own domestic idiosyncrasies like the sinister side of ‘Lost In The Supermarket’. ‘Chugger Off’ shows the smug veneer of charity muggers as being so insufferable that you would have to run to the other side of the road twice to avoid. ‘Hobosexual’ depicts a homeless Don Juan. Even being in a band and it’s supposed glamour is debased in ‘Cup Of Cold Sick’ and ‘Nine Wrong Notes’ - where the middlemen take the credit over the band’s efforts to play a half-decent gig. But the real killer track is the concluding ‘Half A Ruddles’ with the bass all over the shop as if to hammer home the refrain of “sip, sip, sip”, as the poor protagonist - previously with one pound coin to his name - tries to make his beer last all night.

The aforementioned situation is common to us all. ‘We’ve all been there’ at some point in our lives is the maxim which epitomises the dark overriding charm of ‘Quorn Is Murder’. The good humour everyman he sees everything like this.