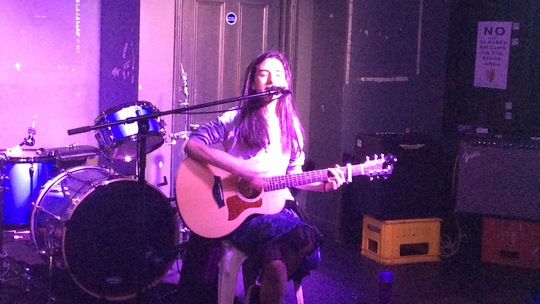 Playing Islington’s The Hope and Anchor has forever been a rite of passage for many a fledgling artiste over the decades - some of whom eventually gained a place in the rock/pop pantheon: notably the Stranglers, the Cure, and Madness. It is therefore fitting that - despite many of the capital’s key live venues closing - it still continues to showcase those who are making their first tentative steps towards bountiful career stages, with the aforementioned pantheon, no doubt, in mind.

Last Thursday marked the debut of young Australian singer/songwriter Natalie Banna - first on the bill. Just 24-years-old, she is an arresting presence with her waif-like aura, and her handful of confessionary numbers immediately bringing to mind the obvious comparison of Joni Mitchell’s album, ‘Blue’ While I mention this description for convenience’s sake, the playfulness of her act really functions like that of the Everly Brothers: singing about dark subjects with an upbeat sprightly accessibility.

She begins with ‘Equality’ - all about a girl who killed a cheerleader out of jealousy. The cheerleader’s physical attributes are clearly described in the narrative, while Natalie sings in an understated but humane way, negating the obvious grimness. Relying on just a mixture of open and barre chords is OK, as she clearly wants to get across the overriding message of her song, rather than use virtuosity as a selling-point.

‘Not A Kid’ is about a fear of growing-up; but at the same time, accepting past mistakes as a means to move on. In this modern age, it serves as an intelligent ‘mindful’ song, and written by someone so young leaves me gobsmacked! This could also be said about ‘Ego’ where a toxic character is both depicted and accused by Natalie in the manner of Dylan circa ‘65. She uses each rigid strum as a definite round of ammunition.

She ends the set with the encompassing ‘In Her Place’ - all about a girl who was pushed too far by bullies, and a cover of Coldplay’s ‘Viva La Vida’ brings everything down to earth nicely, and also espouses her dream pop influences.

I enjoyed the candid nature of her songs as well as her appreciation of traditional songwriting at its most raw - embraced by everyone from the Carter Family to Nick Cave. Her added ebullient charm and downplayed wit fully captured a future star in the making.