A Voyage Of Discovery 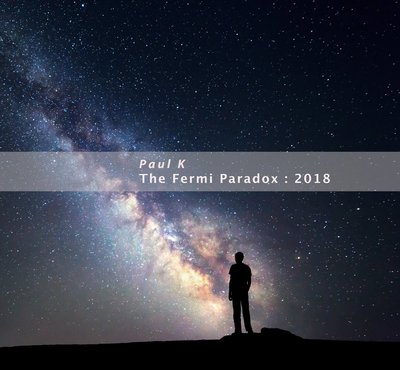 Paul K is one of the best writers and performers of atmospheric electronic instrumentals that I have ever heard, on a par with acknowledged giants of the genre like Vangelis, Jean Michel Jarre and Pink Floyd. His new album, ‘The Fermi Paradox’ refers to the apparent contradiction between the almost complete lack of evidence for extra-terrestrial life and the high probability of it existing in such a large universe. He looks at the concept of being alone in the vast wastes of space and contrasts many of us being alone in our own far more limited sphere of existence.

The first track, 'Anomaly', reminded me of a slower version of Vangelis’ ‘Alpha’ which was used so effectively in Carl Sagan’s original and ground-breaking ‘Cosmos’ programme. That was explained with the second track called ‘Sagan’ which blended superb music with snippets of spoken voice recordings, a theme threaded through the rest of the album. ‘Ecce Homo’ which means ‘Behold the Man’ was premiered at the astonishing concert he performed to bring ‘Omerta’ his previous album to life. It is a track that seems to speak of the isolation that he references in the album title, a theme he returns to in the stately and forbidding ’12 Billion Eyes’.

Exegesis’ is a word referring to the interpretation of a biblical text as Paul K explores the explanation for our lonely existence put forward by religion many years before science had progressed to the stage of providing a more complete explanation. It is the most upbeat track on the first half of the album, perhaps because of the certainty that those who believe imbue their world view with. ‘Embryonic’ is a beautiful track that sounds like a classical piece, similar to a Chopin concerto to my untutored ear but slower and more mournful, perhaps reflecting our current stage of understanding of the universe which is barely at the new-born stage, however far we seem to have progressed in recent years.

The next track is ‘Boyajian’s star’ which excited a lot of comment in 2015 when it was discovered to have a very unusual luminosity that fluctuated by 22% and which Boyajian hypothesised could point to extra-terrestrial life. It is a searching, uplifting track that communicates the excitement involved in this possible indication of life beyond our planet.

‘Parallax’ is the most Pink Floyd like track on the album with insistent guitars and a tight musical motif that moves it along. ‘Dark Matter’ returns to the Vangelis influenced tones of the Cosmos soundtrack to excellent effect as the album continues to mesmerise, delight and make the listener think.

‘FRB’ refers to the Fast Radio Burst that investigators are looking for as evidence of intelligent life sending us a message. It has a hopeful, almost pleading tone, with the slightest hint of ‘calling Occupants’ by Klattu, but made famous by The Carpenters, in the background, the theme of World Contact Day appropriately enough. ‘The Great Silence’ deals with the infinite nature of the universe asking how many stars it has counted since its genesis, a very unnerving thought in many ways.

‘The Drake Equation’ is simply a scientist outlining the Drake equation which puts together all the variables that may be needed to decide how many intelligent civilisations may exist in the galaxy. The final track ‘Arecibo’ references a huge radio telescope in Puerto Rico and takes us on a musical journey as it explores the vastness of our celestial home.

It will be a bit of a wait as the full release has been set for November 2018 to add a vinyl release to go with the CD and download versions, but it will be worth every minute. Paul K has made another classic album, in both senses of the word that makes the listener engage with every track, intellectually and emotionally. I learnt more about the search for extra-terrestrial life from googling the titles of the tracks than I had previously learnt in many decades of reading and studying! Anyone who loves instrumental music, or indeed music full stop, should search this out, enjoy it and learn from it. It is a singular album from a singular talent.