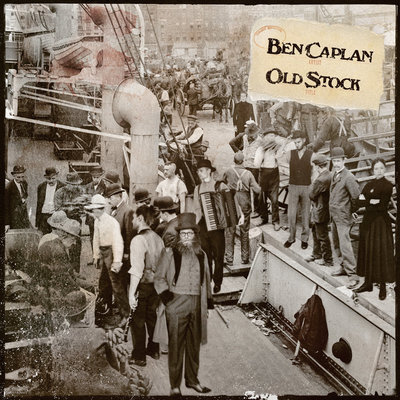 Canadian alt-folk powerhouse Ben Caplan has been tearing through the world like a bespectacled bearded wildfire, touring relentlessly from town to town and attracting dazzled new followers like a modern day pied piper since 2013.

He is back with a multi-faceted new project, ‘Old Stock’, comprising a play (which has been earning impressive accolades since it debuted at Edinburgh Fringe and Off Broadway in New York), and his third studio album. ‘Old Stock’ is deeply drenched in Klezmer, which is appropriate as it tells the story of Romanian Jewish refugees coming to Canada in 1908. Caplan has spoken of taking great care to select the fine group of musicians to collaborate with, and the results certainly paid off. ‘Old Stock’ is a rambunctious, colourful adventure, full of love and humour and tragedy.

The songs come together to form a narrative yet stand alone in their own right. The music is punctuated by some spoken word pieces, like the haunting and heartbreaking ‘Intermezzo 2’, or the funny and uplifting intro to ‘Truth Doesn’t Live in a Book’. The latter is a heartwarming and humorous little ditty that reads like a contemporary guide for life – ‘Always have a little bit of salt with your tequila/don’t smoke your stash if you want to be a dealer’.

Thematically, the album shines a light at the issues surrounding immigration, which ring as true today as they did when the play is set, 1908. ‘Traveller’s Curse’ is the opener, belted out in Caplan’s distinctive baritone vocals, and sets the tone for the rest of the album – beautiful clarinet flourishes over bombastic Klezmer structures and poignant lyrics – ‘you fell out of your mother’s arms on the correct side of the border’.

We live in times when ‘Old Stock’ and its message feel more important than ever, and Caplan et co succeed in delivering with humour, sensitivity and humanity. While they delve into some incredibly dark corners, ‘Old Stock’ is also about love and family and human connections. ‘Minimum Intervals’ deserves special mention – speaking about the appropriate time for a married couple to have “relations”, it crescendos into a chaotic, hilarious, high speed frenzy that will get your feet off the ground.

‘Old Stock’ is a testament to Ben Caplan’s versatility as a vocalist, songwriter and showman, and his ability to conjure up a vast array of human emotions. Prepare to laugh, to cry, to dance, to sing along. One can only wonder what other fancy tricks Caplan has been hiding up his sleeve, but they will certainly not be boring.