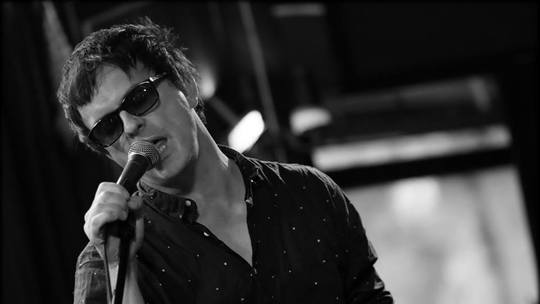 The monthly showcase of talent curated by veteran NME/Guardian writer Mark Beaumont often throws up some strange musical combinations. But tonight's pairing of electro ararchists Artificially Yours and the more mainstream pop of Lara Smiles, seems – on the surface at least – stranger than most.

But, as we discover as the evening goes on, they have more in common than their outward appearances might suggest.

Lara Smiles takes to the stage early, but despite the late afternoon light still pouring in through the curtains of the Monarch she has no problems kicking up the requisite atmosphere required for night time carousing. In front of a gaggle of her clearly devoted supporters and curious onlookers drawn indoors by her slick but infectious sound, she chucks out sharp, spiky riffs, tossing her mop of dark curls as she moves to the music.

The band is a stripped down three piece affair and as so often is the case, they work triple time to make a big noise. The bass and drums thunder out an impressively thick carpet of sound on which Lara's songs can lounge luxuriously, built around catchy choruses but flirting with punk, pop, rock and electronica, her drummer somehow managing to trigger sample pads in between marling time on the kit.

Her current single 'All For You', which she introduces early on in the set, is a prime example of what she does best, blending a free and easy disco groove with power pop hooks. But on tonight's showing, she has plenty more tricks up her sleeve, and we await the imminent arrival of her debut album in anticipation.

Artificially Yours' approach is the polar opposite of Lara's approachable, accessible and relatively wholesome modus operandi. They're down one member tonight, but being reduced to a Sleaford Mods-style set up of bloke on laptop and singer doesn't seem to diminish their power one bit.

Their vocalist Chat hides behind dark shades, staring into the distance or the blank television screen on the wall next to the stage. As expressions of existential ennui go, it's hard to beat, although their own film show, projected behind them as their play, with its psychedelically affected views of the British countryside juxtaposed with Hell's Angels and magic mushrooms, comes pretty close.

Add to that the fact that the Met fittingly decides to scramble a fleet of police cars outside not long after they've begun, sirens squealing and blue lights flashing, and you have the perfect conditions for the Colchester crew to flourish in.

Not unlike Lara Smiles, their initial image only tells part of the story, and there's a plethora of interesting influences at play. There are the gothic overtones of Chat's booming and often echo-laden vocals, suggesting comparisons to Joy Division's Ian Curtis or Nick Cave. Behind the laptop, meanwhile, the equally wonderfully named Grumb, produces shuffling hip-hop beats and cheeky hooks at times, like the gloriously sarcastic 'Super Market Sound', at others going for ear-frying space rock FX, or the sludgy grunge guitars that inform the terrifying momentum of the title track of 'The Merger' EP.

Two bands, then, that have chosen their profile and stance carefully but who, once a few layers have been peeled away, actually pick and mix the best from a refreshingly eclectic palate. That's the way, as Hot Chocolate once said, we like it.