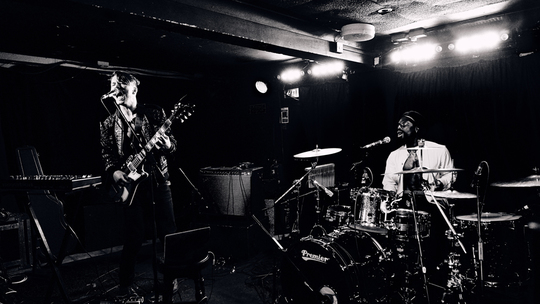 It's pretty telling that the day before a film about the collapse of one iconic 90s beats and breaks label 'The Man From Mo'Wax' hits cinemas, James Lavelle's counterpart at Wall of Sound, Mark Jones can be found in a sweaty East London basement simply continuing to what he does best. Namely playing some great tunes behind the decks and bringing us a whole new clutch of exciting new acts.

Jones, dressed head to toe in pink and clutching a pint of unrecognisable pink liquid, has to work pretty fast though. Presenting us with four live acts doesn't leave much room for Andy C-style epic sets, but from his opening tune, 'Take California' by Propellerheads via Human League, Grace Jones and Mekon's wonderfully bouncy collaboration with original New York MC Roxanne Shante, 'What's Going On', he spans wide musical areas despite only drawing on his own label's archives.

These now regular nights of Wall of Sound-curated live music, however, are much more about the future of music than its past. Opening act Elizabete Balcus, hailing from Riga in Latvia, incorporates elements of performance art into her solo show, playing MIDI-coordinated pieces of fruit while sporting a leotard, a weird hat and a resolute, grim smile.

Having been alerted to her talents by her Wall of Sound single 'IKA', we were expecting more of the same streamlined bleep pop. But her set tonight much more of a freeform affair, switching mood and tempo unexpectedly, the rumbling sub-bass and machine code melodies augmented perfectly by her ethereal voice and occasional flute solos. It's like listening to early Genesis rewired and remade by Throbbing Gristle, and you'll definitely be hearing more of it.

Mobius Trip Mob are up next, who in fact prove to be less of a mob and more of a duo. Their dreadlocked frontman plucks his bass with the dexterity of Bootsy Collins and Klay showing off his amazingly rich, Prince-like voice, dripping in charisma. One to watch for the future, definitely, although he'll need to tighten up on his stagecraft – there's far too much fannying around during and between songs. Blindfolding your drummer for a song when he's already having trouble keeping pace with your stripped down drum machine grooves might not be the cleverest either move either.

He could certainly do with taking a leaf out of the Purple Lights' book. Over the past couple of years they've progressed from being an intriguing but sometimes ragged duo fusing rock and reggae into a highly polished outfit who are ripe from crossover success. They're at their most effective on songs like 'Dance In A Trance' and 'Triggerman', where Rob Fincham's Sabbath-esque riffing and Akeeba's drums lock in to make genre-defying funk you can headbang to. But they're also developing their softer side. “This one's a bit lovey dovey,” Fincham warns us before playing the more lilting, sensitive 'Lake', showing they're capable of adding pop sparkle to their array of musical weapons.

But tonight is all -or at least mainly - about headliner Lara Smiles, who is here launching her debut album 'All For You'. There's clearly a lot of love for her in the packed room, a mixture of friends and fans, and she doesn't disappoint.

Materialising onstage in a sparkling, multi-coloured catsuit that gives her the air of a sea goddess who's just emerged from the depths, she spits out a succession of short, sharp but unbelievably catchy songs. Backed by bass and drums, and knocking out jagged notes and grungy thickness left, right and centre, Lara's songs are as infectious as they are energetic.

So infectious, in fact, that you feel there's a clutch of hit singles lurking within her set list. 'All For You' itself is powered by a heavy dancefloor stomp as well as a skyscraper-sized chorus, but even the heavier tracks like 'Dictate Peace', 'Zombie' and her closing track 'Coincidence' still survive as singalong pop gems despite being set in a sea of distortion and big, big guitars.

Rather like the Wall of Sound ethos as a whole, there's a common thread among tonight's acts of combining the uncompromising with the inviting and the accessible. One step beyond the normal, long may they prosper.