Oh, What A Knight! 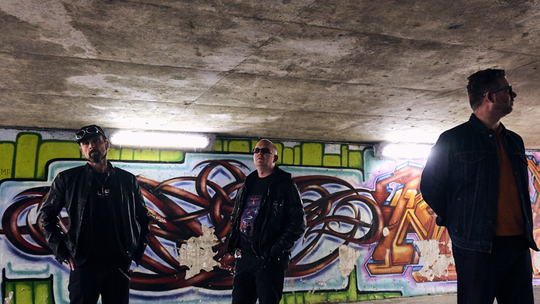 When this reviewer comes to list a few of his favourite things, raindrops on roses and whiskers on kittens don’t figure very largely. Gnarly acid house, punk rock attitude and raunchy guitar riffs, on the other, most certainly do make the list.

Which is probably why Sir-Vere, the Milton Keynes based new signings to the legendary Wall of Sound label, are among our favourite acts of the year so far. They take a fantastically un-puritan view of music, taking undiluted dance vibes from techno, house and electro – with a special emphasis on the nostril-flaring excesses of acid – and chuck in rock guitars and hip-hop breakbeats after them into the pot. Then they the extremely full on stylings of frontman Craig Hammond, a man whose snarling vocals have elicited comparisons with everyone from Killing Joke’s Jaz Coleman to the much missed Mark E Smith, for maximum startling effect.

Tonight is the launch party for their new album ‘Psychoballisticfunk’ and if there was a case of something doing exactly what it says on the tin, then this is it. Hammond stands stage front, whirling himself around to such an extent that his two bandmates, DJ Stevie Vega and guitarist Gary Morland appear, at times, to be pinned to the back wall of the stage. He takes to the microphone sporadically, muttering dark lyrics – “big brother you will consume me” from the song ‘Consume Me comes instantly to mind – and adding a menacing air, not dissimilar to the way Mark E Smith acted, in his own words, less as a singer and more like a traditional Jamaican reggae toaster, prodding and goading the groove along rather than simply adding vocals.

‘Psychoballisticfunk’ is an ambitious and expansive affair with nearly 20 songs on it, spanning a lot of moods from atmospheric instrumentals to full on songs. We have to admit that it’s slightly frustrating that they only scratch the surface of its diversity in their relatively short set tonight, playing only three album cuts and concentrating, in the main, on the mid-tempo thumpers that are best destined to move party dancefloors. But there are still some corkers contained within. ‘Holy Fool’, with its evil, snaking guitar line, ‘Plaything’ and the aforementioned ‘Consume Me’, which they save til the end and which certainly hits the spot. So while we could have done with the breakbeat recklessness of recent single ‘Night Time’ or the New Order-esque grace and beauty of ‘The Sundance Kiss’, there’s certainly no complaints.

Honourable mentions must also go the supporting cast on what is a bumper-packed night of electronica entertainment. Elizabeth Balcus from Latvia – imagine Kate Bush inhabiting a parallel universe in which she is signed to electronic anarchos Digital Hardcore Recordings – does a good job of getting things going, finishing her set by pelting the audience with fruit she’d previously been using to trigger her samples. Caulfield Beats, meanwhile, do the acid house thing with cool and restraint but touch the heights of ecstasy – both literal and metaphorical – at times, and newcomer Brett B, recently relocated from his native Manchester to South London, makes a lot of new friends with his positive and instantly accessible breakbeat sound.

All in all, it’s a great send off for a great album. This is one ‘Psycho..’ you won’t be doing your best to avoid.