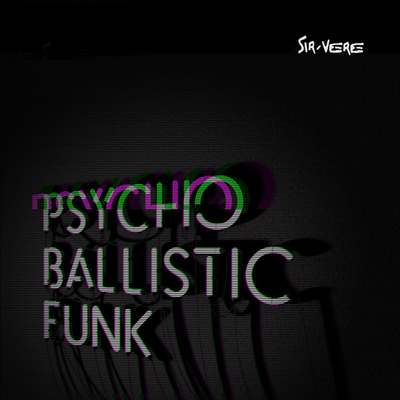 The idea of rock/dance crossover has become more than a little debased since the glories of the Mondays and Stone Roses. But where so often it has meant a watering down of both elements, in the case of Sir-Vere it’s the quite the opposite. If anything, there’s a chemistry going on here that makes it more rather than less than the sum of its parts.

Much of the credit for that must be down to the threesome’s resident DJ Stevie Vega, because the carpets of bumping rhythms he lays down are a big factor in the success of ‘Psychoballisticfunk’. The band have been given various tags in recent months, in the wake of the singles ‘Holy Fool’ and Night Time’ which dropped before the album, with RDM – the hard rocking equivalent of EDM – and electro-punk sort of but not completely summing them up. Probably the closest comparison, if perhaps an obvious one, is with Prodigy’s blend of crunchy riff and even crunchier beats. But with this is like hearing Prodigy with not only hip hop powered drums to back them up, but also a floor slaying sensibility that takes in hard edged electro and techno.

Among the many tracks worthy of a mention are ‘I’m On Fire’ with its suitably glowing, pulsing bassline and wriggling acid embers that take you right back to dancing in a field somewhere off the M25 in 1989, the brutal tribal house thud of ‘Lights Out’ and the Ecstasy--soaked euphoria of ‘Lips’, the final track on the playlist.

Beats are all very well though, even beats as good as this, but with that bedrock to build on, the punk-inflected vocals of Craig Hammond and the guitar work of Gary Morland are what take it out of the realm of the everday. Hammond's moods swing from the doomy ('Consume Me', 'Holy Fool') to the celebratory and hedonistic ('Lights Out' 'Night Time') and give the grooves the extra layer of personality they crave. Morland's riffs just seem to push the rhythms along nicely and, like the vocals, create a pleasing contrast with the more synthetic, computer-based sounds.

With energy levels high and lots of stylistic twists and turns, Sir-Vere have created something that you can dip into quickly or sit through in one session without getting bored.