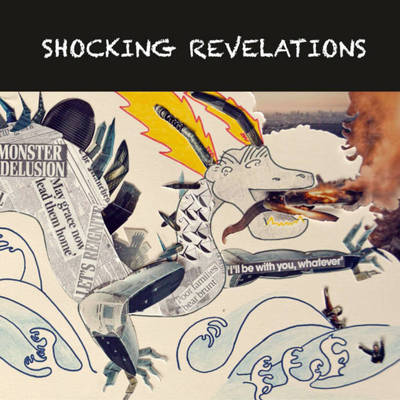 Like any seminal Daniel Lanois-produced album; ‘Landscape’ is the overriding theme that dominates this album-release by folk-punksters, the Bonesetters. However, the tongue-in-cheek protest-ridden twists and turns beautifully allude to the centuries-old transatlantic oral and political tradition, while packing more than the prerequisite punch.

Main man and guitarist, Newport-raised Bonesetter Rhys Davies has an idiosyncratic singing voice by way of Peter Hammill shaking hands with Townes Van Zandt, and being ordained by Dylan Thomas. He is joined by Mark Braby on drums; Graham Bierton on bass; Jack Hayter on fiddle and banjo; Jonathan Clayton on cello, and Brona McVittie on harp.

Recorded at Onecat studios in Brixton, ‘Shocking Revelations’ is their second album - the follow-up to their debut ‘The Blood Is Up’. It insistently and instantly transcends any anti-folk generalisations by beginning with Led Zep slide-guitar and Matt Johnson-style interjections circa ‘Infected’. This is weighty cinematic raw-to-the-bone stuff, and it is symbolic as the burning motorcycle at the end of ‘Easy Rider’. This is also true of ‘I Will Be With You Whatever’ - a sure contender for the songwriting legacy left behind by Love’s ‘A House Is Not A Motel’ 36 years on. Different war. Different continent.

The ‘English Songs’ remind me of the photographs of Don McCullin who depicted ‘the underside of society’ both in his chosen landscapes and subjects. ‘Land Of My Daughter’ juxtaposes the 1966 Aberfan tragedy with one sole Welsh harp-maker being a bastion of nationalistic pride, despite the man-made erosion of the landscape, and unfortunately, its people.

‘Together’ has a ‘Boy’s Own’ ebullience, even though the view is foggy rather than sunny at the top of the mountain as per the song’s YouTube video. ‘Goode Old England’ is a Burroughsian mish-mash of both elevated and downtrodden imagery, with an infectious Pogues-style penny-whistle being at the forefront. The people maketh the landscape and vice-versa. The aforementioned infectiousness is also prevalent in the brilliantly off-key ‘Tender Commendments’ with it’s arbitrary stabs of Johnny Marr guitar.

The album’s eclecticism is pushed even further with two songs: the first being the contemplative ‘The Ectasy Of Trees. This song - with it’s Fairport-like bridge - could even be classified as a folk-prog epic. After all, trees are the very life-blood of nature. ‘To Bring Food To The Table’ with it’s overt pre-war bluesman leanings brings everything full-circle, making pertinent the fact that the ‘blues’ stemmed from dire poverty, and was a necessity rather than a pastime.

Even though they deal with controversial subjects which may not be everybody’s cup of tea; these deeply personal songs have a unique richness of their own - much like the landscape which inspired them. ‘Shocking Revelations is a ‘grower’ that may take a few listens. But, believe me, your patience will be rewarded.