In Search Of The Lost Chord

A Search With Treasure At The End 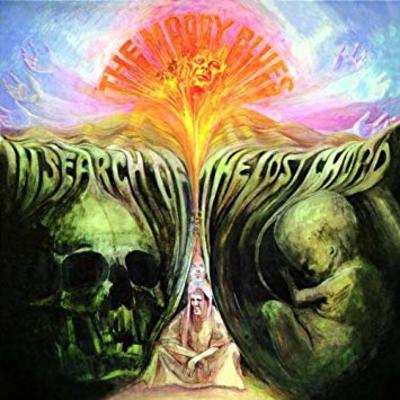 In Search Of The Lost Chord

50 years ago, one of the greatest 1960s groups, the Moody Blues, released their classic album ‘In Search of the Lost Chord’. The album has been rereleased and has been given the full reissue treatment with extra tracks and alternative versions. This review is going to concentrate on the original album tracks to see how they stand up 50 years later.

‘Departure’ starts the album off with a spoken word introduction that sounds reminiscent of the Lunatic is on the grass speech from 'Dark Side of the Moon'. ‘Ride my see saw’ is a much more upbeat, almost Beatles style tune with excellent guitar work and superb harmonies. ‘Dr Livingstone, I Presume’ has more of a Hollies vibe as it name-checks a number of explorers in a very tongue in cheek manner.

‘House of Four Doors’ will be more familiar to those who only know Moody Blues from ‘Nights in White Satin’ as the gorgeous vocals of Justin Heyward blend with the instinctive harmonies of a group that are totally at ease with each other musically. It is a psychedelic delight that moves into a fantastic piano solo that just takes your breath away.

‘Legend of the Mind’ is a tribute to Timothy Leary, the man who popularised LSD as a mind expanding drug and originated the phrase ‘turn on, tune in, drop out’. If there was any doubt where some of the psychedelic influences of the 60s came from this makes it clear that in some cases at least there was a chemical element to it!

‘Voices in the Sky’ showcases the ever brilliant, ever gorgeous voice of the matchless Justin Heyward who had one of the most beautiful voices in 60s pop music. There is more than a hint of ‘Forever Autumn’ in the tune and, like that track, it is a song you could totally lose yourself in.

The ‘Best Way to Travel’ is another Beatles style track with an obvious nod to Sgt Peppers but which stands on its own merits as an excellent piece of music. ‘Visions of Paradise’ is appropriately a song that takes your mind on a musical journey. Where that journey takes you is probably different for every individual, but it is a breathtaking piece of music that will open you up to new journeys and new visions every time you hear it.

‘The Actor’ is a meandering piece of music which would be good if you heard it as an individual track, but which doesn’t quite , to me at least, match up to the amazingly high quality of the rest of the album. On many other albums it would be a standout, but the creative high that the group had reached made the usual rules fly out of the window.

‘The Word’ is a recital of a poem that seems to be a filler, but you realise that it is a lovely poem as you listen to the words. ‘Om’, the final original album track, has an Indian style backing no doubt influenced by the increasing contact with Indian philosophy that was popular in the late 60s. It brings the album to a satisfying and hypnotic end.

One of the elements of the album that is lost in the download thumbnail is the power of the original album cover, a picture of a skull on one side, an unborn baby on the other and a mushroom cloud above. It is a truly unsettling picture that shows the care that was taken with design when a 12” canvas was available. For that reason alone, you will get far more from the CD or vinyl as you take in the little details.

Sometimes when an anniversary CD or Vinyl is put together you do wonder if this treatment of the original album is really worth the effort for anyone other than the completists. For this album it is a resounding yes.