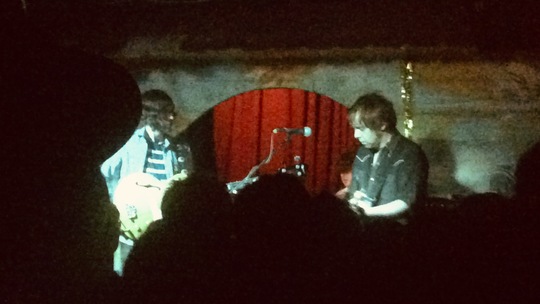 A band such as Boston-based quartet Magic Shoppe - whose members are American, Canadian and Irish - slot easily into a musical watershed that existed exactly 50 years ago: when latter-day psychedelia evolved into the hard rock, punk and electronica of today’s currency.

Elements of the Stooges, Led Zeppelin and the Silver Apples prevail in their set. But what makes everything come full-circle - from the beginnings of psychedelia circa 1966-7 - is that their very moniker would fit nicely on a track-listing of a UK ‘Rubble’ compilation, along with the suitable occasion of playing in an archetypal East London boozer on an unusually warm English autumn evening. You get the picture. Whether by intention or default, they go out of their way to embrace the ambience of a crucial century-defining two-and-a-bit years. Hell, they even name check the good ole Grateful Dead.

The lyrics - which aren’t at all strident - remain elusive during the opener ‘F**kstrated’ which contains ghostly Eastern-sounding feedback. This alludes to singer/guitarist Josiah Webb’s preference of music over song-meaning. ‘These Boots Are Made For Dying’ has an almost the Cure meets My Bloody Valentine drive, with a distinctive nonchalance of its own. It’s chiming bridge has a slow-motion Tom Verlaine feel.

‘(Un)sound Mind’ is bassist Stevie Moonboots’ moment in the spotlight. He begins the song portentously in a Krist Novoselic fashion - an apt intro for the intensity of Josiah singing the verses in a beautifully submissive manner. This song epitomises their overall sound which has the added distinction of the lead and rhythm guitar alternating in a wholly ego-less fashion - making their whole live experience totally beguiling.

‘White Coat Syndrome’ begins like the disoriented attack of a 21-year-old Iggy Pop blinded by the UFO Club light-show. As it gets going, the layered sounds of the song develop into butterflies in the stomach defiance. The Wytches-like ‘Kill’ also occupies the same arena, with the Magic Shoppe’s phased-out dissonance negating its overt predatory nature. ‘Trip Inside This House’ is obviously unsubtle title-wise. But like the aforementioned songs it belongs, whether by accident or design, to this distinctly dark performance phase with its electric burning lyrical imagery. The late Beatle-like backing vocals give the song a nice ambiguity. A band’s roots are always evident in performance, and that’s cool.......

While doing background research for this review, I stumbled across how prolific the Magic Shoppe are songs-wise - enough to fill umpteen releases, which they have done to date. This implies that gigs in the not-too-distant future may will explore unchartered terrain. After all, this one was barely 30 minutes long. Always space in my calendar to be part of this magnificent journey.