REVIEW gig Micko and the Mellotronics The 100 Club, London W1 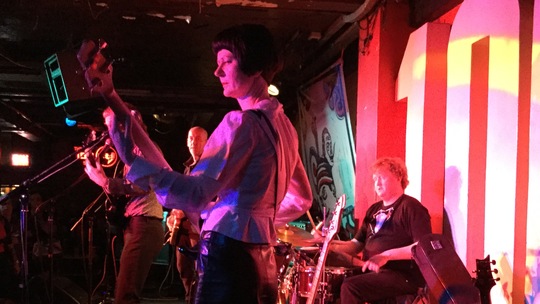 On paper, this review is somewhat superfluous. This is the fourth time that I have reviewed Micko and the Mellotronics, and the fifth time that I have seen them live in the space of just over a year. But during that time-period, they have gone through three very distinct line-up changes well worth getting my fingers more ink-stained for.

This has undeniably led to a few more branches being added to a more than pedigree ‘Rock Family Tree’. If you want to get technical; you could cast a net as far back as September 1976 when the Mellotronics were youngsters/had yet to be born. I am talking about the nascent Siouxsie and the Banshees’ debut at the 100 Club here. You could arguably say that the ball was rolled for the Mellotronics circa that very gig. Lead guitarist Jon Klein - who was 16 at the time - became a Banshee just over a decade later, and not forgetting the branches referring to the Sex Pistols and the Cure, just to name but two.

To adorn such a ‘full circle’ event - as the main support for a benefit gig for Dan Treacy of the Television Personalities - there is a new girl in town, Vicky Carroll who has just replaced the recently-departed Jenny Lane on bass guitar. Vicky currently plays in Owls of Now and Uncanny Valley.

With the Louise Brooks lookalike Vicky and Micko - on Gibson SG - striking the prerequisite angular poses, the Mellotronics begin their customary up-against-the-clock barnstorming set with ‘Schmescos’. Vicky stands incongruously and interestingly stock-still in her office-like apparel, emitting lethal slabs. ‘Sick And Tired’ is rickety-sounding, but in a good way, with pummelling barre chords and a wickedly melodic Byrdsian guitar solo courtesy of Jon.

Micko Westmoreland is open about the Freudian nature of his songwriting. His album title ‘Yours Etc Abc’ was inspired by a childhood incident, and ‘Psychedelic Shirt’ “about growing up in Leeds” is no exception. The titular refrain seems to hammer home the oppressive parochialism of the song’s location, a ‘Scout Hut Disco’.

‘Casting Couch’ is brittle-sounding and redolent of the seedier but matey football terrace side of glam by the way it is sung a la Slade and Gary Glitter. Coupled with the fact that it is all about Hollywood’s dark side gives it a subtle transatlantic twist. Despite technical problems with the mike, ‘Darkness Closes In’ is pure no holds barred garage punk, reminding me of the strangulation of the Stooges’ live sign-off album ‘Metallic K.O.’ Jon’s arpeggiated solo is, once again, the silver lining, and Nick Mackay’s highly visual drumming is totally transfixing. A law unto himself and part of the original line-up.

They sign off with ‘Imelda’ which Micko convincingly sings sans backing vocals, which is a challenging effort in itself. It gives a new side to the Mellotronics’
ever-changing adaptability which has got them this far, and will continue to do so. Welcome aboard, Vicky.