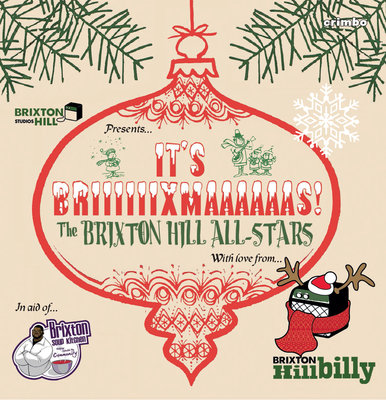 They’re trickier than they look, Christmas songs. Ladle on the sentimentality and you risk cheesiness at its most rancid – yes, we are looking at you Cliff. But more than a sprinkle or two from the irony jar and you end up looking like The Darkness doing ‘Don’t Let The Bells End’, because let’s face it, no-one likes a smartarse.

It’s a delicate balance that the six tracks on this seasonal mini-album of South London talent compiled by Brixton Hill Studios skilfully manages to maintain, we’re glad to report. The headline news here is the first release by the heavily hyped Black Midi, recently described by the NME as “the best band you never heard” – until now, that is. Their collaboration with Birmingham-based singer Jerskin Fendrix on the opening track, here, ‘Ice Cream’, starts slow and plaintive, with more than a hint of Tom Waits at his best about it, before accelerating into a wall of blurring, buzzing synths and pyrotechnic drumming. If this is how they choose to start their career, we can’t wait to hear what’s coming next.

‘Winter’s Grace’ by Alessi’s Ark brings things back down to earth, much simpler with its acoustic strumming and Alessi’s velvety voice, before Ham Legion’s more madcap punk prog stylings bring the first side to a close quite spectacularly, its “we better start dinner” chorus emphasising the holiday’s human side, in stark contrast to the bombast with which the three-piece slam the track home.

‘Christmas Present’ by Bad Parents is arguably the whole affair’s ultimate highlight, sentimental enough to tug your heartstrings but cynical enough to ring true, with whistling to boot. If the competition’s varied and accomplished enough to make choosing a best track difficult, we can safely say this is the one you’re most likely to find yourself singing this time next week.

‘Christmas Time’ by the Meat Raffle-affiliated Scud FM is next up, a truly heartbreaking tale of being burgled on Christmas eve, “they even took my dog” being the killer line as a drum machine shuffles away in the background. Don’t count on Sir Cliff covering this one any time soon. Only marginally less chilling is ‘Christmas In Prison’, the final offering and the one from the whole project’s instigators Hot Sauce Pony. A quick delve in reveals it’s not about life behind bars, as it might initially appear, but more the virtual prison of a doomed relationship. “A kiss below the mistletoe,” sings Caroline Gilchrist, “I laugh out loud / inside I choke”, as the band show a more restrained, if still tension-filled sound to the sound they’ve been premiering this year with the much heavier single ‘Burnt Ends’ and ‘What You Don’t Know’.

You’d certainly be hard pushed to find an album that takes such an original swipe as this at the well-worn form of the Christmas song. Add to that the fact that all proceeds are going to aid Brixton Soup Kitchen, which provides food and advice to homeless people not just in SW9 but all over the country, and you’ve got TWO great reasons to buy a copy.