Playful With Their Songs, Serious About Their Music 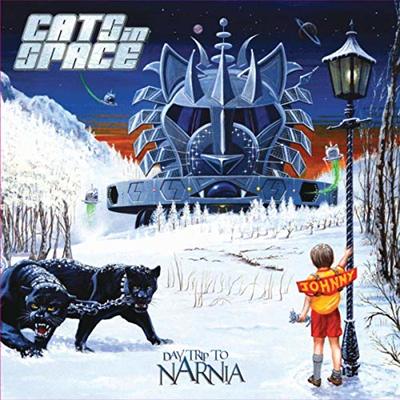 Cats in Space, a band I first saw on the rising stars stage at Ramblin’ Man, have built up a devoted fan base as a result of their marvellous stage shows which have seen them play arenas throughout the country supporting Deep Purple and Status Quo and Hyde Park during the summer concerts series, supporting Phil Collins.

‘Narnia’, the first track on their third studio album, ‘Day Trip to Narnia’, sets the scene for a concept album in two parts. It’s a very 70s device for a very 70s group, whose members have played in a number of groups over the years including Sweet. Lead singer Paul Manzi is perhaps playfully referencing their status as support artists by proclaiming that ‘They think I’m something else in Narnia’!

‘She Talks Too Much’ is a rock version of ‘Rabbit’ with a Queen style riff and lyrics that stay just this side of bad taste because of the twinkle in Manzi’s voice. ‘Hologram Man’ references the appearance of the problematic holograms of dead artists like Elvis Presley and Roy Orbison who, as the lyrics darkly observe are ‘Making more now he’s kicked the can’. It is a serious point wrapped up in glam rock trappings of crunching guitars together with guest vocals by Andy Scott of Sweet.

‘Tragic Alter Ego’ is an absolute hoot and is the story of a 70s group touring the country playing the same songs as they are ‘locked into the classics there’s no album tracks’ but they’re ‘even travelling in separate cars these days’! It’s great fun recognising the homages to ELO, The Beatles, Queen and Slade. It is something of a manifesto for Cats in Space that ends with the Bohemian Rhapsody crash!

'Silver and Gold' is a tribute to Glam and perfectly captures the sound and attitude of the Chinn and Chapman era of Top of the Pops. For anyone who bought songs in that era it just brings the memories flooding back. Make no mistake, Greg Hart and Mick Wilson the songwriting cats are not only immersed in the era but can bring it to life for fans old and new.

‘Chasing Diamonds’ is a surprisingly heartfelt and gorgeous ballad, in the context of this playful album, that just melts out of the speakers. The final song of the first half of the album ‘Unicorn’ could be seen as a commentary on chasing any dream, but definitely works as an observation of why the Cats do what they do. The entire group have bought into the dream and Manzi’s vocals are complemented perfectly by the lead guitars of Hart and Dean Howard, the bass of Jeff Brown, the piano and synths of Andy Stewart, the drums of Steevi Bacon and the vocals and synths of Wilson.

The second half of the album is a concept album ‘The Story of Johnny Rocket’ which starts with the ELO influenced ‘Johnny Rocket’ about a boy with fantasies of life beyond the daily bullying and name calling of school. ‘Thunder in the Night’ sees a girl walk in to a club and blow Johnny Rocket away. It is an Abbaesque disco stomp with a clear echo of ‘Gimme, Gimme, Gimme’ and just explodes out of the speakers. If there was any justice this would definitely trouble the singles charts. It is probably my favourite track on the album.

‘One Small Step’ sees Johnny proposing to the girl from the previous song, called Twilight, prior to going up in a rocket. As it turns out though it’s a hoax that will satisfy both conspiracy theorists and those who think they are mad! ‘Twilight’ is the letter that Johnny writes to his beloved prior to the mission. ‘Yesterday’s News’ is another superb ballad that sees the aftermath of the mission and the letter from Twilight’s point of view. ‘Destination Unknown’, a Mike and the Mechanics style track, brings the story of Johnny Rocket to a satisfying close as Cats in Space show what a versatile and talented band they are.