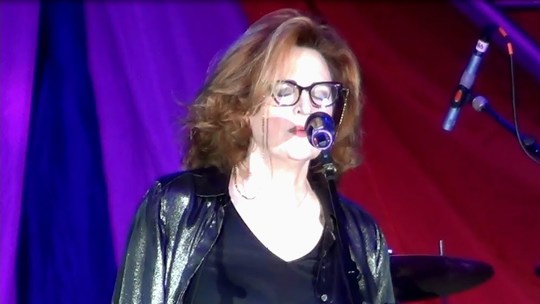 After many years following Barbara Dickson’s career I finally got a chance to see her live at the Hazlitt Theatre in Maidstone. The set started with a song called ‘The Royal Mile’ by Gerry Rafferty, a fellow Scot who she clearly idolises, and immediately demonstrated that the strength and beauty of Barbara Dickson’s voice has not been affected by the passing years. Straight after she paid tribute to another of her musical heroes, George Harrison, with a superb version of ‘If I Needed Someone’. The first of her hits, Another Suitcase in Another Hall from Evita, just oozed quality. Following that there was the traditional Scottish folk song, ‘The Laird O’ Dainty Doon By’ which reflected her early performing roots in the folk clubs where her talent was first spotted. ‘Lady Franklin’s Lament’ was a broadsheet ballad from the 1800s about a grieving wife’s decision to launch a search for her husband whose ships had been lost searching for the fabled North West Passage.

In the first five songs she had covered everything from 1960s pop to show tunes to story songs and traditional Scottish airs. The versatility and eclectic nature of her approach was the theme of the night as was her in depth introductions to nearly every song she performed. These introductions were just as interesting as the songs themselves as she went in to the stories behind them, the social, cultural and historical setting of each one. I’ve seen many artists in concert over the years who have engaged with the crowd in various ways, but I have never seen someone who is as knowledgeable about the music or who can communicate that knowledge so effectively. Her sheer fascination with the process of making music and discovering unfamiliar songs was a joy to hear and it meant that the audience went away, knowing much more about the music they had just listened to.

She finished the first half of the concert with ‘Run Like the Wind’ a song written by the marvellous and underrated Mike Batt which was originally meant to be on the soundtrack of Watership Down but which was cut from the finished film. It was a first half of constant delights and surprises and left the audience eager to hear what she had in store for the second half.

‘King Orfeo’ had a fascinating story behind it, which Barbara enthusiastically regaled us with. It is a very old song from the Shetland Isles which existed in fragments in an old book of traditional songs. It was reconstructed and put to a tune by a man named John Stickle and alternated lines in English with lines of Middle Danish a very old language that developed in the 1100s. Quite what it was doing in a song from the Shetlands is a mystery. Another ancient folk song she sang was the gorgeous medieval carol ‘Corpus Christi Carol’. In both songs, Barbara’s voice was ethereal and timeless and gave real magic to these neglected areas of British music. As she said when a rendition of Victorian song ‘Barbara Allen’ was followed by her biggest solo hit ‘January February’ we couldn’t say that we hadn’t been given variety in this show!

There were two more highlights, the song ‘Easy Terms’ from Blood Brothers, a musical by Willy Russell was heart rending and beautiful and confirmed the wisdom of Russell’s decision to write the role of Mrs Johnstone with her in mind. Finally, my favourite song in her entire catalogue, the haunting and sublime ‘Caravans’ was sung with power and beauty, leaving the audience to give her probably the biggest ovation of the night. That is another Mike Batt classic by the way so I refer you to my earlier point!

Her interplay with her band of Troy Donockley, Nick Holland, Brad Lang and Russell Field was a delight as these four incredibly talented musicians gave her fantastic support to add so much texture to her amazing voice. Although it’s a small theatre the acoustics at the Hazlitt Theatre are excellent so it really made the most of the vocal and instrumental talent up on the stage.

Barbara Dickson has been singing professionally for over five decades but she is still discovering new songs, still trying new arrangements and still endlessly enthusiastic about her music. She is an incredible artist and an example for anyone who aspires to a long and successful career.