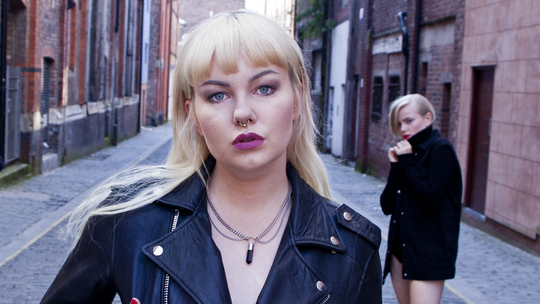 The Magnettes are a pop trio hailing from Pajala, a sleepy town home to just 2,000 residents ten hours from the hit making hub of Stockholm. I knew they would be fun and kitsch and a great night out - but had no idea they'd be so gutsy and cool to boot.

Coinciding their 229 Club set with the release of their new track ‘KIMNKANYE’, The Magnettes offer up an exciting pop number with a catchy hook and relatable lyrics. Played live, the song packs just as much punch as it would do in the studio. With an ear for well produced pop music with a touch of originality, The Magnettes have found their own sound making music that’s pretty… but not too pretty, if you catch my drift.

It's very easy for today’s electronic music groups to get caught up on replicating the quality conditions in which their music was first conceived in a live environment. Making sure the track is as polished live as it was in the studio. The Magnettes make no such apology, displaying what would be akin to a punk/rock gig, dressed in leather and sporting goth like make-up, you could be forgiven for thinking you were at a Green Day gig. or something much darker but equally and manic and energetic.

For a band of The Magnettes status they have profound stage presence. Occasionally during the set they would occupy the empty floor space in front of the stage, thrashing wildly as if they were the ones at the gig. The audience loved it, as they made their way around the venue chanting their own lyrics before quickly rushing back to the stage before the song finished. A polished routine with a few choreographed dance moves added real ‘WOW’ factor to their set.

The producer of the group, Tomas Backlund Thunestrom, stood quietly in the back using his drum pad to trigger tracks whilst adding live percussive elements on the go. He looked like the coolest of the lot with a weird puppet master vibe.

So yeah - definitely kitsch and fun. But also a sensory punch in the guts whilst having a massive injection of Swedish cool. In fact, my kind of gig entirely.