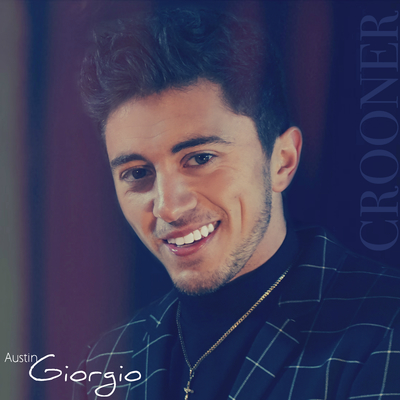 Not too long ago, there was a time people pulled vinyl off the self; or out of a milk crate; slipped the scratch ridden disc out of its sleeve and dropped the needle. Time’s moved on. The teak hi-fi cabinet has been replaced with the slim metallic iPhone. Pioneer, over the ear/volume control, headphones have morphed into white buds springing from the listener’s ears. People once lounged and cruised to music; the culture now multitasks and walks to tunes. Yesterday people listened to music. Today, most only hear it. Austin Giorgio’s freshman release of all original music, 'Crooner', redefines yesterday’s romantic tropes by embracing a contemporary attitude and sound. Drop the needle, 'Crooner' is music you listen to.

Some listeners have placed Giorgio into the same category as Michael Buble and Harry Connick Jr. Though a few comparisons can be made, the similarities stop once one notices how Giorgio’s recordings of popular songs purposely upend the traditional standard. His past takes on “My Funny Valentine” is not only bookended with banging cords but the piano cuts Giorgio’s caramel smooth voice throughout while the usually restrained “Put Your Head on My Shoulders” becomes a slow jazzy lament. His interpretation is to mindfully deconstruct the music’s sound to illuminate its lyrics anew. Giorgio’s overall vision is closer in the record store bin to Jamie Cullen and Amy Winehouse. Though his work tics all the boxes when celebrating mid-century cool, there is an underlying modern rendition. Crooner places Austin Giorgio’s music as modern mid-century modern.

Content dictating form is the craftsperson’s adage found throughout the ten songs on 'Crooner'. Giorgio’s lyrical content is peppered with such references as Sinatra’s “summer wind” and Marvin Gaye colliding with retro diners and the ominous lonely light of a lover’s cellphone. A woman denying her past love staggers through “Photograph Underwater” as the world drifts by in an alcohol induced haze. Giorgio’s use of the word “ripple” adds to the song’s wavy feel but it also suggests the cheap, sweet wine once preferred by heavy drinkers. “Such Class” is one of the standouts on the album with its modern sexually charged take on “Me and Mrs Jones.” The last sensual lyric is abruptly cut off thereby suspending both the narrator and listener in perpetual longing. The breaking of bond and spirit dance though the unstrung music box of “Broken Ballerina.” Another personal favorite, “Stardust” centers on a woman trapped in a romantic fantasy of her own making. The piece begins with low-fi pops, hisses and a sample of Cary Grant and Audrey Hepburn engaged in brief flirty banter. This snippet, from the classic romantic suspense film Charade, places the imagery which follows into tragic context. The lovelorn woman in the song, never to be an Audrey Hepburn, is looking for a nonexistent Cary Grant ideal. With these works, Giorgio takes the clichéd term of the hopeless romantic and harshly redefines it into individuals without hope, clinging to a romantic shadow.

But all is not lost. Being the true crooner, Giorgio effortlessly moves from melancholy to pure joy. And these songs also favor and reward the passionate dreamer. The nostalgic “Table Top” celebrates the dizzying feeling of first love and its power to transfer joy from one individual to another. Giorgio’s lyric cleverly spins from “I” to “you” to “we.” The unapproachable Italian cosa bella ignites “Shooting Stella” into jubilant dance chords brighter than la luna. An infectious giddy reflection informs a hope filled cruise along the beach in “Do You Feel It?”

Almost all of Giorgio’s lyrical narratives on Crooner involve the tension of either anticipation of love or the lingering memory of things past. The narrator is never directly united in a relationship with his muse until the album’s close with the intoxicating conga beats and rumba sounds of “Roaring Nights.” Here Giorgio places the listener into the heady stream of consciousness of being in love. The narrator, “fumblin’ and mumblin’” in the face of beauty, can only dance. Giorgio constructs a lyrical soundscape which captures the buoyant, at times overwhelming, rhapsody of love. The song is the perfect nightcap to the beautifully conceived songs which proceed it.

Everything old is new again. The iconic album cover of 'Songs for Swingin’ Lovers' shows a dapper Sinatra overseeing two lovers embracing. The cover of 'Crooner' is a photo of a dapper Giorgio overseeing the listener. 'Crooner' invites its listener to reflect on the many facets of romantic love and longing. Its sweet and bittersweet tones are constructed by a thoughtful artisan. And as with all talented artisans, Austin Giorgio is way ahead of us. But catching up to him and this thought-filled art is a joyful experience with many rewards. Crooner asks us to dust off our vintage Pioneer Headphones and listen.