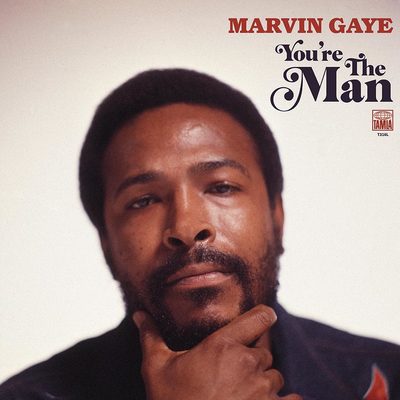 When you hear that an album hadn’t been released at the time it was originally recorded, you are entitled to fear that the record company are scraping the bottom of the barrel when they put it out years later. This is emphatically not the case with ‘You’re the Man’.

The title track is unusual, not just because it is overtly political in nature, but because it is steeped in the funk of the early 70s which many people will not associate the smooth voiced Motown legend with. His high pitched delivery is definitely different to a lot of his more familiar output. It was the uncompromising political nature of the lead single that led to Berry Gordy of Motown refusing to put the album out.

‘The World is rated X’ is a much more familiar Marvin Gaye that oozes class and has a similar sound to ‘Sexual Healing’. ‘Piece of Clay’ starts off with a marvellously mellow guitar solo followed by a sweet piano and a gospel voiced Gaye singing about the cruelty of wanting to mould people into their own image. It is a gorgeous song with a very downbeat message about human nature.

‘Where are we going?’ continues the theme of political commentary as it talks about the way that 'hate fuels the fire’ and sounds very appropriate for our own fractured world. Given that this was made at the time of Vietnam, it is perhaps a lesson to us that our current problems are not as unique as we believe them to be.

‘I’m gonna give you respect’ is a smooth soul number that complements his high pitched vocal with a superb soundscape that puts the brass instruments to good use. ‘Try it, you’ll like it’ is pure Motown and it’s great to listen to, while ‘You are that special one’ has more in common with the developing Philly sound of the time.

‘We can make it baby’ is a plea to his lover to fight their way through the tough times as their kind of love is worth making that effort for. ‘My last chance’ sees Gaye channel the crooning style popularised in the UK by Sweet Sensation on their Number 1 ‘Sad Sweet Dreamer’. ‘Symphony’ is another smooth track that showcases the amazing versatility of his voice. ‘I’d give my life for you’ could have been the soundtrack for many a first wedding dance if it had been given a proper release. ‘Woman of the World’ presages the funky riff of ‘Sexual Healing’ while the instrumental ‘Christmas in the City’ is more of a throwback to the Dave Brubeck style free form jazz of the previous decade.

The next track is a much smoother reworking of ‘You’re the Man’ which hides the strident lyrics behind a late night, smoky riff, reducing its effect. ‘I want to come home for Christmas’ could have become a staple of the festive season with its aching lyrics and gorgeous instrumentation. ‘I’m going home’ returns to the style of ‘What’s going on?’ and ‘Mercy Mercy Me’, his big hits of the previous year and is an album highlight. ‘Checking Out’, the final track, sees Gaye sing over the top of a Shaft style backing to hypnotic effect.

This is a mesmerising album that could easily have been an all-time classic if Berry Gordy’s usually infallible ear for a hit had not deserted him because of the uncompromising songs on this album. If this re-release leads to the album being reappraised it may still come to be seen as an all-time classic. Let’s hope so, anyway.