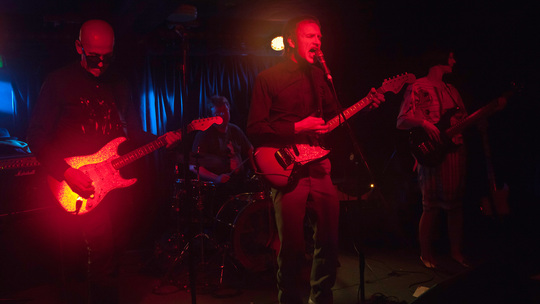 When you have been supporting Micko and the Mellotronics for as long as I have (this is the fifth time time that I have reviewed them!); it is realised that every gig is an event of sorts as well as a turning-point to say the least. You can make judicious use of the fine wine cliche here!

In the Sebright Arms in Bethnal Green, deep within young family-friendly Hipsterville, with a Northern Soul event incongruously happening upstairs, they show that they are fully ensconced in the skin of their current incarnation. A sense of natural transition is established like the early Beatles’ live ‘Help’ period being markedly different from their earlier ‘Can’t Buy Me Love’ period.

The day of the gig is inauspicious, with April showing its cruellest month side with relentlessly grey weather, and the basement that they perform in is, well... murky. But such circumstances seem to be in their favour. In their latest publicity shots they proudly convey a Film Noir aura. Lead guitarist and ex-Banshee Jon Klein is musing over his fretboard, wearing sunglasses. Go figure.

Such a defiant pose provides a warm audience-sharing sense of camaraderie with the fourth wall definitely broken. They characteristically begin with ‘Schmescos’ containing literally crying chainsaw guitar and molten slabs of bass c/o newish member, bob-haired Vicky Carroll. This is a definite shock to the system, and takes on an almost industrial feel akin to the riverside environs a few short miles down the road.

‘Psychedelic Shirt’ is brutally executed. Micko is a man possessed like a David Byrne caricature gatecrashing the ‘Eraserhead’ film set. A mention should be given of the Roky Erickson/Pere Ubu-like drama of ‘Sick And Tired’. Its powerful bass and static guitar (also prevalent in ‘Casting Couch’ and ‘The Now’) are integrated enough to outline a somewhat darker dimension for the Mellotronics: familiar touchstones and influences are disoriented and curdled in an almost Escher-like fashion. Nick Mackay’s Bonham-like drumming has been forever, no frills but plenty of chills and thrills.

The show-stomper is undeniably ‘You Killed My Father’ - a very new song. This is (I kid you not) similar in feel to an ‘80s prog-rock anthem, but devoid of any “follow me” Messianic ego. After all, Micko was in a prog band aged 11, called Wheat Stone Bridge, and I have alluded to his A to Zetro catholic tastes in previous reviews. Even though they are unrelated, the aforementioned song is like ‘Imelda’ in the sense that it provides a surprising songwriting quantum leap. ‘You Killed My Father’ can definitely take centre-stage until the Mellotronics’ next epoch. Comedy-rocker and Zappa contemporary Neil Innes makes a guest-appearance on the recorded version. Credentials certainly cannot get any better than that!

Micko and the Mellotronics are a rock geek’s primal fantasy: the result of endlessly flicking through vinyl bargain bins, and re-reading the music weeklies with ink-stained fingers. The late Albert Camus would be proud! Watch this space as the forthcoming album could be the key touchstone of the 21st Century!