The DollyRots Deliver The Soundtrack For The Summer With 'Daydream Explosion' 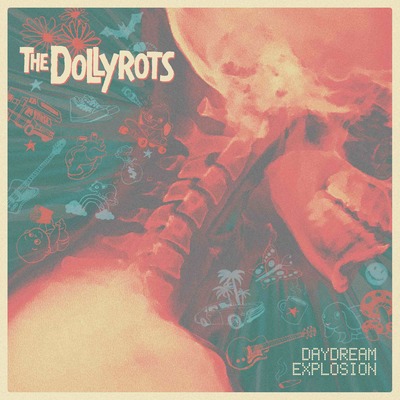 On their seventh studio album 'Daydream Explosion', The Dollyrots find the perfect mix of Pop, Punk, Rock, and everything else that makes the Dollyrots continuously impressive. Coming off a list of DIY releases this time around they opted to bring Steven Van Zant to the party and release on his label Wicked Cool. Which seems totally appropriate since Daydream Explosion is just that and more.

If you've followed their evolution, you have watched them grow into a powerhouse duo and amass a loyal following, where everybody is made to feel they are part of the "Dollyrots Family". Just go to a show and I betcha either Kelly or Luis will say at some point during the live set “We’re not just a band, were a family”, and they mean it, live it, breathe it.

Let’s talk about 'Daydream Explosion', 14 solid tracks that run the gamut. The duo have grown from punk rock kids to beyond solid adult artists and so has their music with the twosomes songwriting at its best on this patch. Longtime fans will celebrate the familiar brand of punk 'n' roll on display, and newcomers might find it difficult to resist the Dollyrots infectious sensibilities and musical honesty. 'Daydream Explosion' is a celebration of a band and generation moving comfortably into adulthood while sacrificing none of its rebellious attitudes.

The album kicks off with “Animal” and punchy guitar riffs from Luis Cabezas, and a monster drum launch as Kelly belts out 'Set her free like an animal?" Next up “Everything,” is a punchy sing-along anthem that is bouncy as hell. “In Your Face” begins with a smooth guitar intro from Luis, and then slides into sweet melodic candy from Kelly who croons breathily, the calm before the stormy chorus. This type of composition is what the band has always excelled at and they are at their best.
While there are party songs like “Love You Instead” and “I Know How To Party,” The Dollyrots show-off their musicianship and versatility with “No Princess”, “Flippin In My Red Dress”, with its old school swing vibe and “Oblivious". 'Daydream Explosion' is the band’s sixth album with longtime producer John Fields (Jimmy Eat World, All Time Low).

At the end of the day and the end of this new set of songs The Dollyrots just want you to be joyous, full of verve and dancing (safely) on the rooftops, celebrating life right along with them. The Dollyrots have a style everyone needs to hear.