Remembering The Past & Bringing It Up To Date 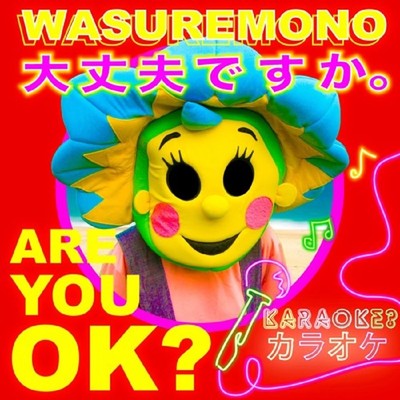 Wasuremono are named after a Japanese word meaning ‘something forgotten or left behind’. Perhaps they thought that 80s style electronic music was what had been left behind. If so, they have dusted it down and brought it right up to date in a similar way to the excellent Ekkoes.

The album starts with the title track ‘Are you OK?’. The music is clearly influenced by the lush mid 80s style Depeche Mode/OMD influenced electronica and it backs up the tune with a fantastic beat. I really enjoyed the way that the tune was in the front of the mix whilst the lyrics were more in the background. It made you listen to them more closely and worked very well atmospherically. When the singer asks, ‘Are you OK?’, it seems to be directed as much at himself as the listener.

‘Lonely Type’ starts with a ‘Hey Mickey’ style drum machine which gives way to a strong bass guitar. The lyrics are once again part of the music rather than front and centre. It makes the sound of the song interesting and original. The lyrics are clear and opaque at the same time, lending themselves to many individual interpretations. ‘I wonder why life feels so wonderful. Wouldn’t it be nice to climb inside a bubble’, hints at a need to look at things positively even as you need to escape.

‘School’ starts with a chilled beat that builds into a hypnotic vocal performance that definitely evokes early 90s OMD from the 'Sugar Tax' album era. It is a bittersweet song that looks at the time when you are going to see your children grow up. ‘Don’t Play with Ghosts’ has a more grungy start but then develops into a plaintive atmospheric song that belies the initial heavier feel. It fades out with a melodic synth that has a hint of 'Feels Like Heaven'. The lyrics once again play with the listener’s head and reward repeated listening.

‘Never Felt this Way’ before has the DNA of Paul Simon’s 'Gracelands' running through it and is a multi-tracked choral performance that sweeps the listener up. It has an appropriately uplifting set of lyrics with the joyful chorus declaring, ‘I’ve never felt this way before’. Self Help is another OMD influenced track with a very catchy chorus that continues the more positive vibe with another uplifting refrain of ‘We will find you and we will, we will work it out’.

‘One Last Trip’ is a slow build of a song that uses muted harmony on the vocals to good effect. It speaks of those days when you leave a country having taken one last trip to the familiar places. Appropriately enough it reminded me of my final months in Japan, preparing to leave after three years. ‘A Lesson to Learn’ has a Police style guitar intro that moves into an Echo and the Bunnymen style vocal with a more upbeat electronic style chorus. ‘New York’ has a hint of early Bananarama at the start and makes for a chilled out upbeat song. I loved the sentiment of the opening line, ‘We count our losses just for fun’. That would be a lovely way to approach life. ‘Nothing is Easy’ is a superb pop song that jangles its way into your ears and is a good backing track to the now familiar harmonies on the vocals. It is uplifting and sums up the album in the line, ‘I’m feeling alive, I’m alive in the light of the morning sun.’

'Hail Ra!' is a great end to a superb album which returns to the OMD influenced approach of earlier tracks. As with OMD they prove that the synth can carry any kind of track. At points it moves into Enya territory with the lush backing vocals creating a hypnotic wall of sound.
This is a genuinely different album that makes you think and would make you dance at the same time. Perfect for summer days when all you want to do is enjoy yourself.