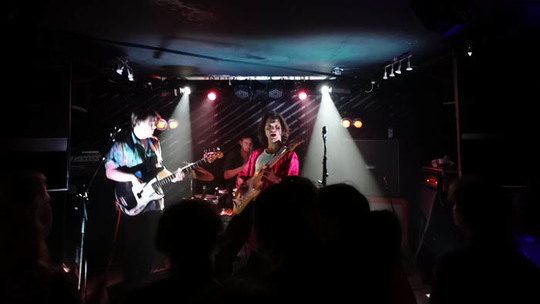 So it’s 8pm on an overcast Tuesday night in Notting Hill and it’s the first appearance in London (in fact “The first in England, ever”) for 28 year old Dutch singer-songwriter Jelte Steven Tuinstra (a.k.a. Jett Rebel).

This evening the three-piece band comprises Jett on guitar and main vocals, Xander Vrienten on bass and Rick van Wort on drums. You can check-in your cynicism and your cool at the cloakroom – they won’t be needed for the next hour and twenty. You won’t be getting any political posturing, you don't have to worry about not understanding the references or being too cool for school. What you will be in store for is a trio of talented musicians who are clearly enjoying themselves and are glad to be there, able to carry off a set of original songs with a passion and verve that can carry an audience.

Jett is not starting this first London gig cold. There's a small circle of fans up front who have come to support, mainly Londoners who have come across him online or on their European travels – and, like a set of footie supporters getting enthused on the train before the big local derby, they're trending towards avid and keen. The better for the atmosphere of course and it means we can dispense with that difficult warming-up stage.

We're straight into a selection of high tempo songs. The music could be described as 'pop-rock', or more precisely 'rock-pop'. Rock is the environment, the mode of delivery, the inspiration, and very much the lead – and pop the sensibility. Sure, at times you do slightly get the feeling that you’ve stepped back along your timeline into a refracted alternate 1974 – but unlike any number of pre-packaged retro acts that you can pull off the shelf, the retro connection seems to come from the organic love of simply playing the music, and a desire to follow where that leads, rather than some planned marketing exercise.

Tuning into these first, faster numbers, I'm getting my ear around a style that's effortlessly echoing Jimi Hendrix and Cheap Trick, Bachman Turner Overdrive and Golden Earring (who were also from The Hague as it happens). I'm getting a riff here, a lick there – a hint of Deep Purple, a nod to The Runaways. The gents can clearly play – and they seem to have absorbed the sounds from their fathers' vinyl collections from birth – possibly in the womb – and are osmotically filtering this for modern ears.

It doesn't surprise me when I read later that Jett learned to play and write music from a very young age, and before he turned ten he could play drums, piano and guitar flawlessly. If you're very good at something it's natural, rather than forced – any references you might pick up along the way a subtle homage rather than crude larceny.

We start with Hendrix-inspired 'LADY ON THE HILL' – complete with 'Little Miss Lover' riffs and guitar solos. Not a bad intro at all, and the audience has certainly woken up. Then it's into a couple of tracks from Jett's January 2019 EP release '¥eah ¥eah ¥eah No' – the drum-led driving rhythm of 'TAKE ME', coming across like a punked-up Status Quo/Cars mash up, quickly followed by the glam-rock-pop of 'DO YOU WANT ME' (question mark not required).

The latest single, 'WAITING FOR THE WEEKEND' is next – just short of two minutes of it – a 'Ballroom Blitz'/'School's Out' for the 21st century, with a brevity The Ramones would've been proud of. It's appropriate timing releasing that for the Summer, I would have thought.

There's a bit of change of vibe with the discordant 'IT’S CRUEL TONIGHT' from the album 'Truck' (released 2016), then 'TONIGHT' from 'Venus & Mars' (the 2014 debut album). "It's no fun when the girls are dancing" goes the chorus – but it's a bit late complaining about that, because by now the girls (and boys) are dancing. Well, not dancing exactly, but the bass line is funky enough to have the punters bouncing.

So far so good. The punters are happy, the music is loud, the atmosphere is lively. The band seem to be enjoying themselves, and Jett thanks the audience for his warm London welcome. He seems moved and humble – or is an excellent actor. Either way the audience are glad they came out. We've had a few changes of tone and tempo, and the versatility of the musicianship and breadth of the songwriting is showing – but how far does that go?

The next song answers that question with a change of pace and a slower tempo – a bit of shade to go with the light. 'DANCING THROUGH THE ROOM' is a bluesy, rocksy ballad – but fresh – suggestive of your first ever smooch at the school disco with that special person you've had a crush on all term. 'IT’S REAL' continues the slower pace. Discovering first love is a song older than Romeo & Juliet of course – but the songwriting manages to avoid tired clichés, and express some of that.

After that brief respite it's time to raise the energy again, with the energetic electric blues of 'DEVIOUS CHILD' and the punky Bad Company-channelling 'I SEE YOU'. Then it's the final number, 'BLEED ME AN OCEAN' – a two part song, reminiscent of a Fleetwood Mac or Led Zep stadium pleaser – but also excellent for the smaller venue.

The crowd want an encore of course, and by audience request that's 2014's 'LOUISE' – which bleeds into Jett's final words of advice to the room, to GET YOUR ROCK N ROLL ON.

And then that is it. Jett's live shows can often last for up to three hours I'm told. This wasn't that, but the quality and the energy was held up throughout, so I can see how that's possible. The next time in London perhaps.

Hearing that he was big in his native Netherlands I wasn't sure what to expect, without another frame of reference, but I can see why this is. There is a talent there, and a versatility, and the desire to push and reinvent, and I'm sure the band will be back gigging again soon, someone near you.