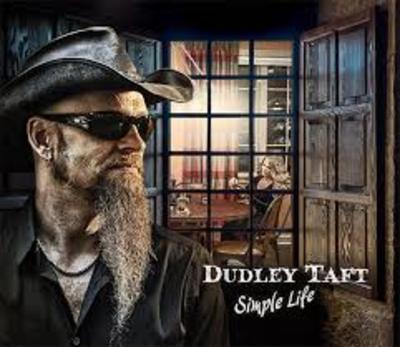 Dudley Taft shows he's a rocker at heart on his new album 'Simple Life' . From start to finish the eleven-song set is filled with driving rock anthems, soaring guitar riffs and buzzing basslines. Between bouts of Taft's howling guitar and delicate delivery, the album also features an all-star cast of musicians to round out the sound, including drummers Walfredo Reyes JR. [Santana, Chicago, Steve Winwood], Summer Rain collaborator Mike Taponga, and newcomer Chris Ellison. Kasey Williams laid down the bass with John Kessler making an appearance on the track listing's sole cover, "If Heartaches Were Nickels," originally by Warren Haynes.

The album opens with a booming drumbeat and guitar that roars with power and precision on an anthemic rocker "Give Me A Song." On the title track "Simple Life" Taft delivers a guitar-driven declaration that proves rock ‘n' roll is alive and well. Elsewhere, "Can't Live Without You," is a blues laced sexy rocker. While the gritty guitar grooves shine on "In Your Way." Taft also brings back a taste of his grunge days (with stints in both Sweet Water and Second Coming) on the haunting track "Death By Bliss," while ‘Bombs Away,' has a funk-filled guitar opening and "Never Fade," "Pouring Down," and "Back To You" are all no-nonsense rock n' roll.

The Midwest native went from co-founding Space Antelope alongside future Phish icon Trey Anastasio in high school to attending Berklee College of Music to founding Seattle staple Sweet Water. He joined Second Coming in 1997 and recorded the group's seminal self-titled debut, which yielded the Top 10 hit "Vintage Eyes" and "Soft." 2006 saw him kick off a successful solo career highlighted by a prolific string of releases: Left for Dead [2011], Deep Deep Blue [2013], Screaming in the Wind [2014] Skin and Bones [2015], and Summer Rain [2017].

On 'Simple Life' Taft digs deeper into his rock roots then he has on his last few albums which is refreshing because this man might have a foot in the Blues, but he's got the heart of Rock n' Roll. Melodic, emotional and filled with hot licks and heavy harmony.

Truth be told, any guitarist that isn't in part influenced by the Blues really doesn't have the heart to be playing. All great rock n' roll in some way, shape or form came from the roots of the greats like B.B. King, Muddy Waters, Howlin' Wolf, Albert King, and Elmore James and so on. Truly great players point to the blues as a huge influence. Dudley Taft is a singer, songwriter and a guitar-slinging rocker with one-foot placed firming in rock n' roll and the other in dirty blues.