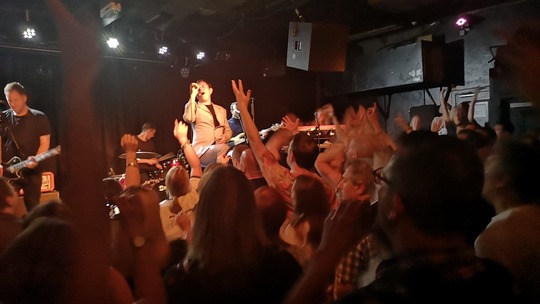 The Lexington, Islington, London, 24th July 2019: You get your money’s worth at a My Life Story gig. All inclusive with your regular entry fee you get: a bit of light stand-up thrown in with the musical and lyrical content; a pint of best British Music Hall banter to ease the evening along; a few recollections and jokes to help make the punters relaxed and happy.

Jake Shillingford’s dapper stage presence has obviously been honed over many years. Even so, it’s so much easier if the audience are in the zone and on your side to begin with, and the Islington crowd certainly are there already. Most would have been fans going all the way back, here to welcome back their home team, and reconnect with some of that youthful ’90s energy.

Outside it’s a hot Wednesday night – not the all-time record breaker that is forecast to follow the next day, but pretty Mediterranean nevertheless – and the band are on stage on time, because the dressing room is so hot they’ve been “sucking fresh air through the keyhole with a straw". Nobody has a problem with that – “We’re all here, right?” Then a little bit of politics (as Ben Elton used to say) – “In the UK a Trump is a fart and in America a Johnson is a penis”. Timely, being as how Boris had just been dodging protesters on the way to the Palace to see Her Maj earlier in the day, and the punters liked it. This is Islington as I said.

A bit more of an introductory hello, a bit of to-and-fro with the good natured hecklers, a Ray Winstone Betfred impression (SO glad it wasn't the "Daddy" one), then it’s promptly into the music with some new songs.

The atmospheric electronica intro of ‘The Rose The Sun’ is reminiscent of an '80s Vangelis. Perhaps this is the influence of the (award winning!!) film and TV soundtrack music they've been working on recently. The song is slow, and makes good use of the expansiveness that the electronic soundscape gives it.

Jake promises us that the next item on tonight's playlist is the only song in existence called ’Telescope Moonlight Boy’. A fine boast – hopefully he's checked to at least page five of his Google results, just to make sure. The tune itself is light mid-tempo pop, and there's some depth to lyrics, which definitely deserve another listen through.

A live concert, however, is not the place to hang around stroking your chin and musing over the meanings of the subtle poetry of new material. You can do that in your own time if you're so inclined. Instead, it’s time for an audience-pleasing time-trip back to the 1990s, with songs from MLS's debut 1995 album, 'Mornington Crescent ', and the follow up from 1997, 'The Golden Mile'. The crowd know all the words and sing along. They’re even happy to do the work and fill the gaps where necessary.

First up there's 1993's ‘Girl A, Girl B, Boy C', a little slice of Britpop (there, I've gone and mentioned the B-word now) – followed by 1997's ‘The King of Kissingdom’, fronting a bit of the cheeky, chirpy attitude of The Small Faces, or Blur.

While we're not looking, the boys (and girl) slip in a new song in the middle of this '90s fest. ‘Broken’ could easily be a '90s song though, or '80s for that matter – the kind of jangly guitar verse and chorus that this reviewer has always had a bit of a soft-spot for. Up tempo, poppy and bright, but with a darker teen-angsty lyrical content that cuts through that – "I'm only broken on the inside".

I read somewhere that ’Sparkle’ was one of Jake's favourites. It's a good sing-a-long anyway, but the crowd really find their voice with the anthemic chorus – "You don't sparkle, you don't shine". There's some swaying hands in the air as well at this point.

Our stomp through the '90s continues with ‘Funny Ha Ha’ (1994) and ’Strumpet’ (1997). Good word, Strumpet – doesn't get much an outing these days. Don't know if the subject of the song refers in any way to the notorious early '80s Palm Beach "Strumpet with a Trumpet" divorce trial. That's what immediately comes to mind, but I'm happy to concede that it could be just down to the way my head works. The lyrics kinda do fit to be fair.

Next up is ‘World Citizen’, the title track from the first My Life Story album for 19 years (released on Exilophone Records on the 6th September by the way – co-written and co-produced by Jake Shillingford and guitarist Nick Evans). Probably the nearest we've got this evening to a political manifesto piece – albeit that it's via the medium of melodic rocky-pop of course – Jake plants his flag with this one. "I'm not afraid of the dark, just scared of what I see", "I'm a World Citizen".

It's just a short leap from the politics of 2019 to sexual politics of 1999. Us guys were never too cogent with all the latest goings on with that oeuvre, so hopefully Na na na na na ’It’s a Girl Thing’ should just about cover most eventualities. Shouldn't it?

The new single ‘Taking On the World’ is an ironic positive-sounding anthem that Jake hopes "misguided scientologists will take it on as their theme song". I guess the duality here is the title could be used for a Rocky Balbao training montage - to express a personal, individualistic fight, or a documentary on UN doctors in the Congo – to show a more collectivist, we're all in it together struggle.

With the single played, Jake thanks us, the audience loudly cheer and applaud, and they're off.

The 21st Century incarnation of My Life Story are a much slimmed down proposal from the orchestral '90s version. Does that make a difference or limit the performance in any way? I doubt it really. The tighter 5 piece arrangement can work with and hold a smaller venue absolutely fine – in fact, it probably works better given the space.

The encore is inevitable, so we're not hanging about, and we're back to the '90s again, and the crowd know the words again. There's the audience participation friendly "Claret is pouring in your mouth, Through your heart, Out your wounds" and "You Can’t Uneat The Apple". It would be a cigarette lighter in the air moment if we'd been outside, and anybody smoked anymore.

And the penultimate moment – what the folks had been waiting for and anticipating, an energetic storm through pop classic ’12 Reasons Why I Love Her’. The audience request might have been for the inflationary (and slightly greedy) 42 Reasons Why – but we're sticking to the original dozen for now.

Tonight's final tune is another newbie, '#No Filter'. It's an unusual one to finish on, after the noisy release of "12 Reasons Why". The opening song on the new album, and potential stadium lead – it's a quiet track with a Coldplay-esque keyboard intro, which then builds to a climax, before tailing off at the end.

We finish up. The crowd are satisfied. The long-term fans have had their sing-a-long and a good dip in nostalgia, and the rest have had received a mixed set of varied and interesting songs, old and new. We’ve had a user recommendation of where to eat when next in the East Midlands (Leicester’s Second Best Curry House), and a top tip on which app will show you the cheapest way to get pissed in Islington. It’s time to file out happy, possibly get interviewed by the promo girls for the accompanying video, and head off to give that Wetherspoon’s app a try.

See the band's Facebook page or official site for the dates of their full UK tour from November, starting back in Islington on the 2nd of the month. Definitely worth your attention.