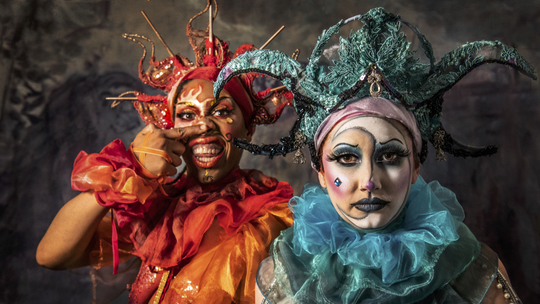 Enter the tent and feel the magic - two figures shrouded in lace hunch silently while music plays, then movement, words and an introduction via two miniature marionettes. Next, their metamorphosis into real life creatures and what creatures are these? Their shrouds are suddenly pulled aside (in an act of defiance that conjures up images of childish dress-up games combined with more serious subjects and resistance to religious fundamentalism).

Before us stand two striking creatures, one jovial and adorned in red, spattering’s of glitter and paint dancing merrily on its chest – the other subdued, sad, in need of a cuddle and much bolstering from both the audience and its happier partner in crime. Human? Fairy-tale? Male? Female? It is left to our imagination until we are introduced - A Brother (Sun, who you’ve guessed it, is the jovial one) and Sister (Moon, Sun’s sad subdued counterpart) who hail from the deepest, darkest depths of your psyche and come to you via the lesser known stories of the Brothers Grimm.

We are then taken on a fantastical, winding path, in a search of a magical stream. Sun and Moon are quick to let us know about their arch nemesis, the wicked witch, who they’ve previously escaped from and is now hot on their tail (a quick chat with both actors later reveals that the character of the wicked witch is an allegory for anyone escaping marginalisation in society, be it down to race, religion or sexuality). Cue audience participation, sing-a-long songs in a nursery rhyme style that seem to both tell of gory details including the murder of a younger sibling and act as a deterrent to ward off the wicked witch.

The scene ends with the hilarious eating of a cooked sausage by one of the audience. This is a performance, which teaches us about sibling relationships, makes us question how society perceives gender, race, religion and sexuality and ultimately reminds us of the innocence of childhood. Actors Natalie Walmsley and Porscha Bennett-Skepple bring this abstract cabaret comedy extravaganza to life with a variety of acting, dancing and musical skills as well as jointly writing the entire piece. Was it suitable for children? Probably not though some would undoubtedly love it!

4* if you’re uncomfortable with nudity during daylight hours.
5* if you like eating sausages!