An Address In Streatham, London SW16

Slip Inside This House! 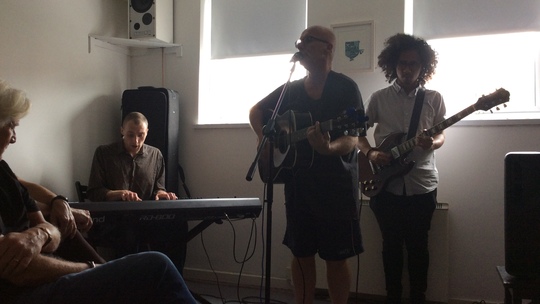 In this era of ‘blink-and-you-miss them’ ticket-selling for the ‘usual’ arena concerts by the ‘usual’ musical stalwarts, a house concert is somewhat anachronistic. However, that was the resolute brainchild of one David Niven: to provide a platform of opportunity for his friends - who are regulars on the London Open Mic circuit - to show off their talents, as well as promoting his new album, the dystopian ‘StrangeLove’ inspired by the eponymous doctor from Stanley Kubrick’s 1964 film.

The catalyst for the gig itself was the frustration surrounding the pre-requisite clause of having to bring a set amount of ‘fans’ along to a conventional venue. Why not adopt the DIY approach with a little help (of course) from social media?

The proceedings take off with a set from acoustic guitar virtuoso, Max Warner. His opener is an instrumental called ‘Never Too Late’ with very deft finger-picking on his six string, immediately bringing to mind the respective oeuvres of ‪Nick Drake‬ and ‪Bert Jansch‬. He puts emphasis on the lower bass strings - creating a slightly melancholic tinge. He uses the fretboard judiciously in ‘Lost My Love’ which has a nice ambiguity: both simultaneously optimistic and downbeat.

‘Soothe’ focuses on nicely incongruous scientific language with crisp downstrokes a plenty (“only soothing agent soothes my soul”). ‘Forget About Me’ makes use of virtually (I kid you not) every guitar technique humanly possible. Like ‘Never Too Late’, the bass notes definitely take centre-stage and are the primal driving force synonymous with Max’s ‘confused’ lyrics alluding to a vulnerable position, and therefore wholly admirable.

‘Natural Wonder’ is a nice hybrid of the styles of the ‪Small Faces‬’ ‘Lazy Sunday’ and ‪Neil Young‬’s ‘Stayin’ Power’ from his ‘Hawks And Doves’ album. It is sincere and appreciative with very upbeat strums. The mood changes subtly with the sci-fi strut of ‘Survival Of The Species’ - a song which is like a mid-period prog-rock concept album in itself: about extracting the natural species in the early 20th century and placing them in the 21st. These early Bowie leanings are also something which host David explores later on in his set. Cerebral stuff for a suburban late summer ‪Sunday afternoon‬, and all the more fitting in the light of the 50th anniversary of the Moon Landing: when science fiction became science fact.

Armed with just one acoustic guitar, Max Warner deserves respect for the range of different genres that he embraces, consciously and unconsciously. For quite a long transfixing set; Max showed zero signs of waning. He embodies the rare ability for a guitarist to have ‘something for everyone’. ‘Entertainment’ from every conceivable angle, and empathetic with the innate trainspotter within us all!

Things quickly move on, and an international mantle is adopted. The second performer is another acoustic singer-songwriter, Maria Errea Rodriguez with her unique trilingual set: the veritable challenge of singing in her native Spanish tongue, as well as in English and French.

Even though her set consists of a handful of songs; Maria performs a beguiling mix of originals and covers. Beginning with an original song, ‘You Discovered Me’. She uses simple strumming but subtly played in a melancholic way, pertinent to her country of origin.

The next song is a cover of a marching Spanish band tune ‘Curretera’ (by Tulsa). She uses open chords to incorporate a strong sense of rhythm, and it marks a distinctive shift in the overall ‘feel’ of her set. Her self-penned ‘De L’autre Cote’ is played with clawhammer finger picking, and sung in French. Like Edith Piaf, she makes judicious use of the ‘voice as an instrument’ concept nicely synonymous with her guitar-playing.

Things take on another shift - but bathos-like - with the lyrically-ascetic cover-choice of ‪Courtney Barnett‬’s ‘Avant Gardener’. Maria hammers home well the song’s vacuous description of hospitals, vegetables and weekday mundanity before embarking on an another original, ‘Hope’ - the last song that she wrote - which begins with nicely over-familiar sounding guitar, and a precursor to her final song: a totally unexpected cover of ‪Bruce Springsteen‬’s career-defining 1975 opus ‘Thunder Road’. Even though devoid of (now cliched) Springsteen-isms, she definitely makes it her own with gusto. The lyrics nicely and accidentally out of sync with the English suburban surroundings. With the overall diversity of her set, Maria is out there to ‘educate’ us all. Both in the ‘continental’ and ‘continents’ sense!

Next up is David Niven himself (pictured above). He is playing acoustic guitar. But a style that owes more to the celestial heights of dystopian fiction than the earthiness of the previous acts. Before his veritable take-off, we are shown a video for his song, ‘You Stand Alone’ created by writer and director Alex Kirk (see the YouTube clip below).

The opener is ‘Strangelove’ which is both gliding and ethereal with tasty keyboard embellishments courtesy of Lawrence Candler (who also helped arrange the album). There are deadpan references to the hostile environment hovering so far above this humble living room. It seems to pick up from where John Foxx’s ‪Ultravox‬’s ‘Hiroshima Mon Amour’ left off 41 years ago, with David portrayed as a stalwart intellectual presence making great and worthy use of simple open chords.

This theme continues seamlessly with the JG Ballard-like ‘Fool You’. The ‘girl’ in the song makes you feel surprisingly more cold in contrast to the previous song, “She was never free” hinting at her crucifixion. A prominent, but melancholic piano solo unmercifully dominates this state of affairs. You can’t knock the accessibility of ‘You Stand Alone’ with its ‘Satisfaction’ bass line. The set’s moment of respite of sorts.

A dizzy feeling of isolation coupled with metronomic Dalek-like vocals seems to run through the set, which is exacerbated by David’s understated presence. But there is an aesthetic respite by the presence of one ‘Iggy’ on Gibson SG, adding a totally ‘out there’ dimension to the set, specifically for the last three songs.

‘Waterfront’ has David play menacing strums on rhythm guitar heightening a spacey alternation between him and Iggy. ‘Secrets’ is again linked through thematically. A soaring Scott Walker-like ballad punching holes in the net curtains of the immediate environs.

‘Zoning In’ - somewhat incongruously the final song - takes you on a journey. It is apocalyptic-sounding (“dance while you can”), enticing and with a very haunting chiming Clapton-like wind tunnel guitar, leaving you with the parting reminder of goosebumps. That in itself is great for David to hammer home his overall ‘message’ as a composer and performer giving him the rightful deserved sense of centre stage, as he is forever the genial host.

Bowie, all those years ago, self-handedly invented ‘dystopian-rock’ with his albums, ‘The Man Who Sold The World' and ‘Diamond Dogs’. Whether by accident or design, David and his band have definitely reinforced the genre for the 21st century. It is interesting to reflect that these albums had their roots in the London suburbs - with Bromley, Brixton and Streatham being mere bus or train rides away. And not forgetting the South London suburbia of fellow Bromley man HG Wells’ ‘The War Of The Worlds’. Definitely something in the South Thames water!

After David is the gamine-like Georgia Maria. Like with the previous acts, variable themes prevail in her set. She sets the room alight with her rhythmic archaic acoustic strumming and very forthright stage presence.

She begins with ‘Red-Handed Man’ - a murder ballad with chiming swooping downstrokes much like her mentor, ‪Jimmy Page‬ with ‘Communication Breakdown’. ‘Age Of Reason’ displays very sophisticated chording, and transports one back to a bygone age with the refrain, “bring out your dead”. Sinister bliss.

The Freudian ‘Tar And Feather’ is all about a woman she knew at school who did her a disservice. So this song is obviously a means of exorcism not unlike ‪Siouxsie Sioux‬ singing about her suburban childhood demons in the early Banshees.

Her last song ‘Musketeers’ begins in a folky ominous early Led Zep way. It has references to goddesses and underpasses. Both ethereal and grounded at the same time.

Having seen her play mainly covers on previous occasions, I was unexpectedly awestruck regarding the originality of her material. A definite new chapter in her career, and an impeccable set, considering she had to later rush off to another engagement!

With the day winding down, we are introduced to ‘The ‘Hampstead Troubadour’ himself, Derek Harris - an unlikely YouTube sensation with his performances outside Kenwood House, and plenty of sincere radio interviews under his belt. A late bloomer; he first picked the guitar a few years ago at the start of his sixties, and has admirably stuck with it ever since.

While no means a virtuoso yet, his songs ‘Searching’ and ‘Don’t Look Back’ are heartwarming enough to make one realise why he has myriads of fans. The fact that he had a last minute rehearsal with the aforementioned Iggy - who provided an uplifting accompaniment to ‘Searching’ - is a sign of a master craftsman.

The day ended with mini-performances of the day: each from Benn Tilby, Dan Caleb and Liam Donaghey. All of which were acoustically individual in their way. Benn, with an intense trademark standing pose, performs a rousing song with his guitar and voice with star-struck references to the planets and the universe, taking a leaf out of David’s book.

Dan displays shimmery watery fingerpicking in his songs, ‘Stay Here’ and ‘Fly The Nest’ which are a nice contrast to his aesthetically petulant performing persona. And lastly, Liam with his childlike songs ‘Poor Johnny’ and ‘Every Time’, and breathy mellow vocals brings everything to a suitable natural finale.

This was a successful day with plenty of worthy and talented performances all round. All of which left me speechless. In such ‘normal’ surroundings, rightful reverence was definitely made to the whole gamut of musical history. Thank you, Mr Niven! Your door is definitely always open!