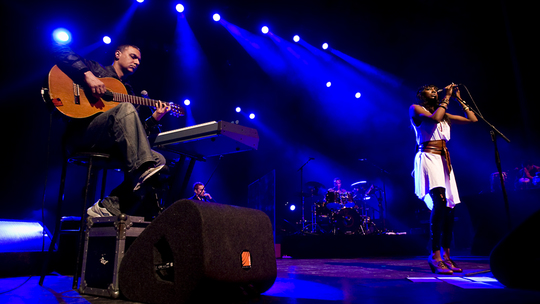 Nitin Sawhney is an artist who attracts a devoted following and 5,000 of us were at the Royal Albert Hall to see him perform his 1999 album 'Beyond Skin' live and in full for the first time. When I saw him live before he was self-effacing and preferred to let his music do the talking. This concert was very different. He was excited, animated and at times very emotional as he performed songs that meant a huge amount to him on a personal level.

The first half hour was a selection of pieces from other albums. He started off with two songs from the album ‘Prophesy’, ‘Sunset’ followed, appropriately enough in chronological terms, with ‘Moonlight’! They both gained in power from being performed live by a marvellous handpicked combination of awesomely talented musicians and outstanding singers. My favourite song of the first half was ‘Dead Man’ from the 'Philtre' LP which was hypnotic, powerful and built to a crescendo that filled the hall.

At the start of the second half Nitin discussed ‘Beyond Skin’ with Nikki Bedi in his usual cool but passionate way giving great insights into the album itself but, crucially, allowing people to take whatever they wanted from the lyrics and music. The plaster cast of Sawhney that is on the front of the album was a scream for identity that went beyond religion and beyond skin. I think more artists should take this approach because the context setting gave the audience a valuable lead in to what we had all been waiting for. The moment that the voice of the Indian Prime Minister of the time, Atal Bihari Vajpayee, rang out announcing the nuclear tests that had just been carried out the audience was transported back to 1999. That first track, ‘Broken Skin’, is a quietly angry and worried reaction to the idea of more nuclear capability being unleashed on the world.

The second track, ‘Letting Go’ has a completely different sound, but deals with being worried that you are not ready to take a chance and move on. The chorus sung by Tina Grace made this already amazing song a transcendent experience live. It sent shivers up my spine as she told us with quiet strength ‘Don’t be afraid of letting go’. It was a message received, no doubt, in 5,000 different ways by the audience but the reaction to the song made it clear that we shared the sheer beauty of the experience. ‘Homelands’ was clearly a song that meant a huge amount to Nitin as he played it once during the album and also finished with this amazing live tour de force. Nina Miranda’s vocals on ‘Homelands’ were sublime, as indeed were all the vocals on the night.

Perhaps the biggest cheer of the night, however, was for Nikki Wells, a powerful vocalist who sang ‘Nadia’ in Hindi. It was impossible to tell it wasn’t her native language and, as Sawhney himself pointed out, it epitomised what ‘Beyond Skin’ was trying to say. The cast of voices and instruments included Spek, a rapper at the time but a music executive now, who was on vocal duties as he had 20 years earlier for ‘Pilgrim’. He is quite frankly the coolest music executive ever! London Contemporary Voices blew us away with powerful performances on a number of songs. Eva Stone and Anna Phoebe provided fantastic support throughout the night as did the entire band in reinterpreting an album that has seared itself into the consciousness of so many people.

At the centre of everything though was Nitin Sawhney himself, a virtuoso on guitar and keyboards, a musical genius and a cultural touchstone for so many people across the world. He has signed a three album deal with Sony which will commence next year with the album ‘Immigrants’. With a huge label behind him perhaps the wider public will finally catch up with the fact that one of the most important and significant figures in music anywhere in the world has been living in the UK and producing works of rare quality for two decades.