REVIEW gig Micko and the Mellotronics The Lexington, London N1

The Kids Are United! 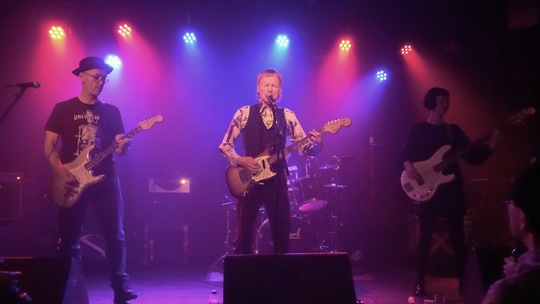 Hot on the heels of releasing their debut single, ‘The Finger’; Micko and the Mellotronics are set, or should I say poised, to revel in an occasion that could be a turning point of sorts: their first gig as ‘waxed’ artistes!

A significant gig usually means a significant venue, and The Lexington, in a leafy part of Islington, is a great one to suit the Mellotronics - who are now definitely going up in the world, supporting post punk legends, the Monochrome Set. The Lexington is a ‘fourth wall’ type of venue with multi-coloured lighting - giving the band an ‘otherworldly’ aura - the way one would imagine London’s infamous psychedelic 60s hotspot, the UFO Club would look albeit a pristine version.

Customarily beginning with the sheets of white noise of ‘Schesmos’, the Mellotronics commence with their impeccable cycle of sound. Micko is clutching the mic stand for dear life in a Jagger-like pose. Whether a parody or for real, it is certainly indicative of the confident performer he has become.

With its vertiginous guitar, ‘Psychedelic Shirt’ is redolent of a nightmare fairground ride - the true sinister side of the one so buoyantly depicted by the Smiths in ‘Rusholme Ruffians’. The very fact that lead guitarist Jon Klein plays a glittery KISS-like Fender is ‘death glam’ in itself, and a definitive nod to his former bands’ and current band’s rooted dabbling ditto Morrissey.

‘The Now’ has brittle stabs of feedback, and is understatedly centred around a D chord. Bass player Vicky Carroll stands stock-still in a guard-like manner, while Micko and Jon churn out an uncompromising garage band-like rhythm. ‘You Killed My Father’ is their ‘punching the air’ Gimme Gimme Marc ‘n’ Elton arena rock moment. It gives a sense of individual being by its early Cult-like flanging and the Northern overtones of Micko taking centre stage. Down strokes shimmer a plenty. A veritable ‘group’ effort with backing vocals from Jon, and the band’s insistence that this is their moment of respite: the yin to their yang. This is also true of the both existential and celestial ‘Halcyon Days’ - about living in New York - which has simply great ‘Revolver’-like guitar, and reminds me of the musical insouciance of the Replacements.

Prior to Vicky joining, the rubbery bass sounds of the Specials’ Horace Panter were recorded, and gave ‘The Finger’ the required kudos. Vicky shows that she has permanently and worthily inherited such a prominent mantle during said song. Her bass seems to debase the Barrett-like strumming of the guitars, but in a good way!

Micko again takes centre stage for the last song, ‘Imelda’. This is a stonking way to end such a barnstorming set, and sums up the Mellotronics’ overall lyrical toxicity, as the Beatles’ inadvertent snub in 1966 is mentioned. From the parochial to the global in one fell swoop.

There is no going back now for the Mellotronics. The fops and spivs are now living in perfect shoulder-rubbing harmony. Watch this space for news of their forthcoming debut album. The world is undoubtedly their lobster!