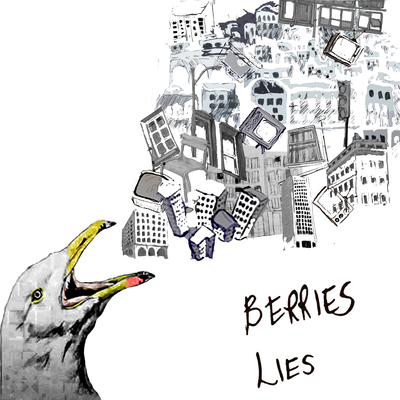 If you're one of those readers out there who regularly venture out to catch new bands in the live music arena, the chances you'll already have come across Berries.

The trio, currently based in East London but with their roots in rural Norfolk, must surely be one of the hardest working outfits around. After making a name for themselves on the ultra-competitive London circuit, they've spent 2019 venturing further afield, making inroads across the UK,

It's not hard to see what their appeal is. A three piece, their arrangements are lean and mean, with precious little space for muso-style showmanship. Instead, a wonderfully all-hands-on-deck approach takes precedence, where Holly Carter (vocals, guitar), bassist Lauren Cooper and drummer Lucie Hartmann lock in and make every last note count.

That's part of the appeal. But the other great thing they've got going for them is the way they naturally slice and dice the genres to create something all of their own. Are they rock, punk or indie? Well, they're all three at the same time. The opening track of this four track EP, their second, 'Lies' has touches of Blur or Elastica's reinvented new wave smartness but at the same time its riffs are heavy to the point of metal. Written about the fine line between white lies and total fibbing, it's the kind of track that has loads of impact but packs so much in you need to put it on again to take in its subtleties.

The EP continues with 'Dangerous', lurching into action with panther-like bass and drums before it explodes into what's arguably the most killer chorus of the collection.

'Silent', a former single for the band, is centred around a mis-shapen, gnarly riff that could have been borrowed from the Pixies, but breaks down into something heavier, perhaps closer to Black Sabbath. Again, the lyrics are intriguing and bear repeated listening, as they do on 'Wits', the final track of the four.

'Wits' seems to be about the challenge of maintaining mental balance in the jungle of modern city life, and it's another unlikely but very naturally executes combination of elements. It starts with Hartmann laying down a punky ska/reggae rhythm, only to be hit by crushing rock guitar, in what could be described as Slits-meets-Maiden if only that wasn't underselling it.
All in all, Berries have awesome firepower, but subtlety and originality in heaps too. Great stuff.