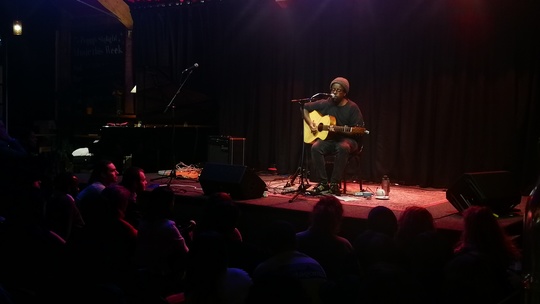 Peggy’s Skylight is a quaint live jazz on the edges of Hockley in Nottingham. Artists perform under the blue hue of the synonymous skylight of Peggy’s on a simple and exposed stage bringing a very personal essence to the performance. There are no barriers, no spacing between floor and stage, just fans and performers sharing a raw and delicate, yet powerful, experience. Even being next to a road on a regular bus route, the venue seems hidden and secretive once inside, almost as if you have ventured into a completely new world.

In a city with a rich history of musical talent, it’s always refreshing to find a truly unique artist. Having been drawn in by the support of the talented Alice Robbins and Keto, the headline act Daudi Matsiko was more a bonus rather than focus.

Alice Robbins opened the night with a selection of new material as well as songs from her 'Lavender Honey' EP, which was released earlier this year. Starting out with her guitar before accompanying a couple of songs with an omnichord, Robbins delivered a delicate and intimate set. The relaxing rhythms beautifully complement soft vocal tones and at times songs almost feel like lullabies of reflection laced with hope and poignancy. The festively titled ‘Neon Xmas’ was a particular highlight alongside new song ‘Lately’ with its comforting and familiar chorus.

The second act was Keto, a local artist whose live performances always seem special regardless of how many times you see them. Keto’s performances always have an aura of enchantment with her vocals acting as an aural mesmeriser drawing and holding audiences song to song. Keto’s set drew heavily from her 'Blackened Pool' album but with some older tracks. Change, aptly named for the night with it not being on the album, elicits dreamlike visions in each verse with a reaffirming and flowing chorus. 'Sublime' and 'What We Do' were a couple of the tracks that made up a performance that seemed to fly by. Finishing with 'Always', a haunting melody delivered with a siren like quality. The chorus elicits a sound that is Kate Bush-esque. Each song draws you in closer and lingers even after the end.

Like adding sprinkles onto ice cream, Daudi added a little something extra to top the night off. The headline act Daudi Matsiko is a Ugandan singer-songwriter born and raised in the UK. As with his special guests before him, the tone of his music is deeply personal full of reflection and emotion. As Daudi began his set, a silent and previously stood audience sat on the floor opening up the space and making the performance all the more exposing and tender. He opened with 'Home' from ‘An Introduction to Failure’ which was punctuated with a heartbeat like tone, something of which could be heard in the stillness of the captivated audience, including one especially dedicated fan visiting from Japan, during the emotive performance. Daudi’s performance of 'You Can Do Better Than Me, But I Hope You Don’t' was beautiful and explores the breakdown of a relationship and longing for its rekindling. Exploring the desire to change whilst being self-deprecating, his lyrics such as, ‘I’d like to become the man that I am supposed to be but I’m a rotten tooth in a mouth full of crooked teeth,’ are both touching and sardonic. Others such as ‘Now I can’t shake your shadow, I can’t escape your ghost’ spread notions of being haunted by the act of holding on. Lubricated on stage by tea combined with the proximity of the artist and openness of the lyrics, it felt more like an emotional outpouring in a living room than a performance in a bar. 'Sandwiches', originally from the EP ‘The Lingering Effects of Disconnection’ explores breakdown, another song filled, or not, with the void of hope before delivering a haunting rendition of 'Houston in the Blind' which echoed through the venue sending shivers through the air.

The ‘second’ part of Daudi’s set was made up of tracks from his upcoming album, cheerily titled ‘The King of Misery. Keeping with the tone, he told us the harrowing story behind ‘Derby’s Dose’ a form of punishment enacted on slaves and partly from a dream, more like nightmare, about Piers Morgan. This was later followed with a slow and sombre song called 'Hymn', slow and reflective in nature, that was met with rapturous applause on its conclusion. The night ended with an encore and a slightly more positively titled song called ‘I Am Grateful For My Friends’. The silent and seated audience rose to a standing ovation following the performance which seemed all the louder having sat over an hour listening eagerly in silence.

Most of the time, the best musical performances are not those in large venues, but those that offer music in its rawest form. Personal, exposing and intimate. A chance for the performers to sing from the heart as an audience sit entranced, un-distracted by externalities, not just listening but embracing and absorbing both lyric and melody. A trio of amazingly talented musicians whose music offered comfort and catharsis to appreciative audiences on a special night.