A Joy Everyone Should Experience: Mac DeMarco’s 2019 UK Tour 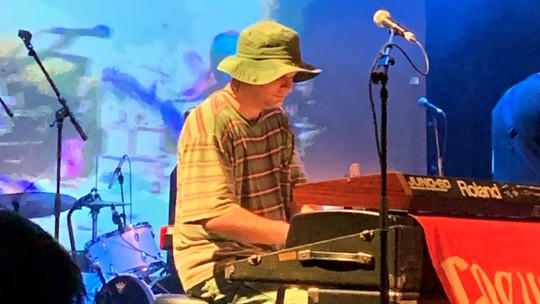 Wednesday 27th November:
It had turned 19:45, it was fast approaching time to enter the venue. Kids just shy of 16 traded cigarette ends outside the concerts doors - dressed in beanies and ill fitting jeans. A bemused steward ran his hands over my torso; a security measure, making small-talk, he enquired, “who’s this Mark DeMarco fella then? Can’t say as I’ve heard of him”. This became a theme throughout the early part of the night - what seemed like half the audience asked me words to the effect of “Is Mac DeMarco any good then? I’m just here for the support...” referring to the sub-par Australian scowlers and pouters Los Bitchos. I got excited for the people who hadn’t seen him, I knew exactly what they were in for; having seen Mac in Halifax, Yorkshire, earlier on in the year, I knew exactly how absurd his concerts could get - although I was truly convinced he could never recreate the overwhelming joy I experienced and the transfixed smile that had been plastered on my face throughout that summer scorcher in Yorkshire back in June. I hate to ruin the rest of the review for you, but he did, completely and utterly recreate that joy.

It was now fast approaching 9pm, the time we had calculated he should take the stage. The dropping of the lights was met with the culmination of an hour’s anticipation from middle class posers and working class stoners alike. The room was alight. Mac bounced on, characteristic beer in hand, bucket-hat sat astride his head. He took a second before taking the microphone carefully in his hands from the stand and announcing, to a now captivated, almost silent audience, words to the effect of, “Hi, I’m Mac, thanks for coming to the show tonight” before introducing his band, all extremely well-liked and well-regarded amongst fans. He then shoots straight into set-list mainstay ‘On A Level’ from 2017’s ‘This Old Dog’ LP. The back of the stage was adorned with paintings Mac had done of wrestlers and the screens behind him showed shaky camcorder footage of what was going on on-stage - interspersed with an assortment of images in the style akin to a Windows Movie Maker exhibition a 12 year old would make in I.T. class. Ozzy Osbourne, Tony Iommi and various Birmingham City goals flashed in the background as the fun unfolded on stage.

The joy of watching Mac DeMarco live is the feeling that you’re watching five guys in a garage working the songs out for the first time, throwing in 30 minutes of covers in at the end - Black Sabbath’s ‘Paranoid’ and Metallica’s ‘Enter Sandman’ among them - yet still carrying Mac’s quintessential ‘jizz-jazz’ sound. He played for 1 hour 45 minutes - which is unprecedented in Birmingham for shows outside of arenas - well worth the twenty-odd pounds we paid for tickets. While it may seem unrehearsed and sloppy, make no mistake - these are an extremely tight and talented band, so it is testament that they can make every show feel crafted as if bespoke for the fans who happened to attend that night.

Another personal highlight of the setlist was an acoustic version of ‘Still Beating’ from his ‘This Old Dog’ album, which is of immense personal importance to me for several reasons - so, personally, it was great to hear live.

It cannot be understated how extremely flawlessly talented Mac DeMarco is as a performer, wonderfully able musician, comfortable enough to take a step back and really enjoy every gig he plays, interacting with fans in the audience at every given opportunity, laughing with his band mates and telling stories if he felt the audience may be left out of an inside joke on stage. He’s the first performer I’ve seen in my ten years of attending gigs who truly looks like he's performing to a room full of his best friends whenever he steps on stage; this makes him a joy to watch live. He even made guitarist Andy White play the guitar solo from ‘Freaking Out the Neighbourhood’ three times because he is proud of the fact he managed to teach it to Andy.

I can’t even begin to stress how joyful it is to be in a room where Mac DeMarco is performing, there is no judgement among the crowd like there is at a lot of indie-gigs in England - once the music starts, it’s just love for the music and for the experience. Get yourself to see him if you haven’t already.