My Kind Of Christmas 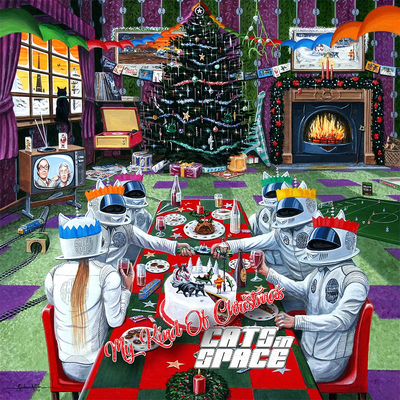 My Kind Of Christmas

The Cats in Space album 'My Kind of Christmas' starts with the title track and it's an absolute blast! The best Christmas single in years and a deliberate throwback to the 70s brings an instant nostalgia kick. References to Hai Karate and Eric and Ernie are thrown in to remind those of us of a certain age what we sometimes want to relive! However, this is no lazy collection of Christmas tropes; it is a genuinely great Christmas single in its own right. The writers, Greg Hart, Mick Wilson and Steevi Bacon are clearly lovers of the Christmas singles of the 70s and have immersed themselves in the genre, discovered what works and brought it bang up to date. Owing more to the Wizzard style orchestration and including the ‘Kitten Choir’ of Greenways School it ticks the boxes but entirely without cynicism. New lead vocalist Mark Pascall is immediately at home as the newest Cat with his vocals bringing a new feel to this track and the album as a whole. The group wanted to revive the Christmas single and they have done it brilliantly.

Next is 'This is London' written by Wilson which starts off with the familiar peal of Big Ben and is a love letter to the city. With a hint of ELO the Cats shine a new light on to a metropolis that so many of us take for granted. Hart, Bacon, Jeff Brown, Dean Howard and Andy Stewart back Pascall’s vocals with some of the tightest playing imaginable, show off the years of experience that they possess. 'If I were you' is a good track, but such is the quality of the album that a tune that would be a showstopper on the vast majority of albums is just an aperitif for the next three tracks. Brown wrote the next track 'Hollywood' and takes lead vocals. It is a superb track that has a West Coast vibe to it that brings to mind The Eagles especially on the chorus. 'Chasing Diamonds' is another corker of a track with a lovely mellow introduction and a great set of lyrics that combine a wistfulness for what might have been with a chorus looking forward to the better times ahead. I really related to the lyrics, but maybe that is what happens when you get to my age! It features another stellar vocal performance by Pascall combining tenderness and strength.

Next comes 'September Rain' which was Pascall’s first single with the Cats. Anyone who has been married for any length of time will just melt when they listen to the lyrics which speak to that dream of abiding love that we all look for when we set off on life’s journey with our partners. 'Yesterday’s News' is Pascall’s version of the Paul Manzi fronted track that appeared on their brilliant 'Day Trip to Narnia' album earlier this year and shows off the slightly smoother vocal style that he has.

Cats in Space are just going from strength to strength and they have a busy 2020 planned, but wouldn’t it be brilliant if they could end 2019 with a chart entry for their future classic 'My Kind of Christmas'?