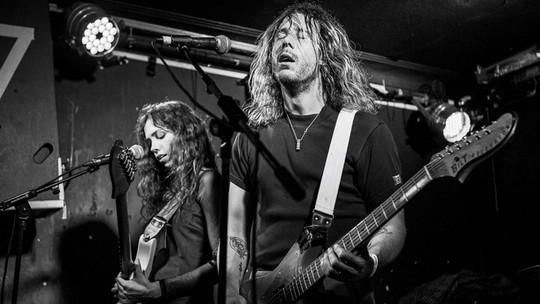 Brighton foursome Beach Riot had been pretty close to the top of my bucket list for bands to see in 2019 and having made it with just a month or so to spare, I was not disappointed.
They reached London after a fairly lengthy sojourn around the UK on tour, and wow could you tell. There's a level of effortless confidence about them that only bands who’ve played a lot of shows together have, a musical telepathy that's almost palpable.

How to describe the experience of seeing them live? Well, they simply ooze colour and energy, so much so that it can be hard to know where to look at times. I love the f-you attitude that Jim Faulkner gives off as he carves chunky riffs out of his bass. Jonny Ross seems to be hitting all of the drums all of the time. But of course the true stars are the two singer/guitarists up front, the tiny Cami Menditeguy, all sparkles and riot grrrl glam, with the towering figure of Rory O’Connor next to her for contrast. They're both pretty great singers in their own right but it's the interplay between them, not to mention when they combine to lift a chorus into orbit, that really makes the world of Beach Riot revolve.

They play everything I hoped for, from the big singles 'Robot' and 'Stuck Inside' to all four tracks from their self-titled EP, available in wonderfully garish pink vinyl. They even sneak a couple of new ones in, but they sound every bit as fierce and the full house of fans jumps up and down to them so hard it feels like the floor might give way.

All of which adds up to a pretty great gig. Meet Beach Riot – your new favourite band.