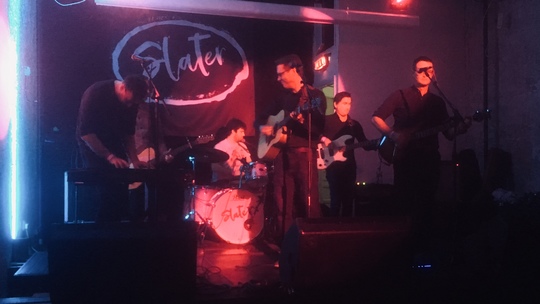 With their pulsating rhythms, intertwining guitars and soaring melodies; Camberwell sextet, The New Immigrants could rightfully be boxed into the decades-old genre of ‘heartland rock’. But as their recent performance in Brick Lane proved, they righteously treated us to a careening journey with its roots alternately in premier league psychedelia and alternative rock (Love, Wilco, The Smiths). They even added latin and prog into their heady stew.

Dressed down and wholly understated, The New Immigrants open with the plaintive-sounding ‘There Must Be Something I Can Do’. This song quickly establishes vocalist/acoustic guitarist Justin Sbresni as the front-man and the band’s focal-point. As they are playing quite a short set, it is imperative that they get the audience on their side. They manage to pull this off surprisingly early - virtually in a blink of an eye. There is soon a mass sing-along which definitely provides the required lift.

The second song ‘The Devil Is On My Case’ is extended in the manner of The Doors’ ‘When The Music’s Over’, and arguably The Immigrants’ signature song. It has a very pronounced transient AOR guitar bite circa when FM radio ruled the airwaves, and when most of America at the time was yet untouched by the punk explosion.

Rather than use it as an expected climax, the gamble pays off presenting the aforementioned centrepiece early: insofar that the way is beautifully cleared for the remainder of The Immigrants’ unflagging capability. ‘Ship of Sorrows’ has a John Perry from The Only Ones/Johnny Marr lead guitar segueing seamlessly into the fists in the air ‘DNA’ which immediately reminds me of Peter Gabriel’s ‘D.I.Y’. Both a welcome rousing diversion and deviation. The definitive crowd puller!

The electrifying ‘Heavens Of Water’ is their latest single. It is presented here with Spanish-sounding guitar intertwined with subtle keyboard nuances courtesy of lofty Immigrant Tom King, who is definitely the Greenwood to Justin’s Yorke. The climatic ‘Reason (Not Faith) Will Save You’ is their most ‘rock’ sounding song with open chords and pounding drums, and bringing everything to an epic climax in the manner of Springsteen’s ‘Jungleland’.

The New Immigrants stated in a recent press release that they would ‘reclaim’ the word Immigrant as an ‘inspirational term of diversity and innovation’. They certainly did so on a rainy December evening with their all out eclecticism. This land is their land.