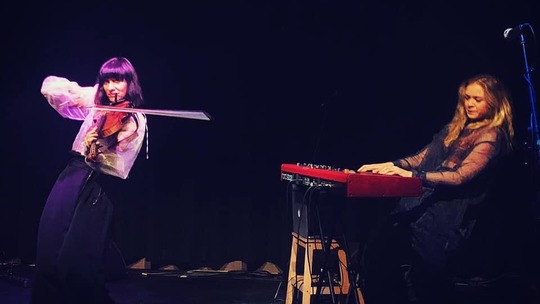 Comprising of violinist Anna Phoebe and pianist Aisling Brouwer who are already accomplished and acclaimed musicians. The pair are managed by legendary producer and Ivor Novello recipient Nitin Sawhney and signed to iconic label One Little Indian (home of Bjork, Poppy Ackroyd, Tusks).

Both artists house an impressive back catalogue of work, Anna has previously worked with the likes of Roxy Music, Trans-Siberian Orchestra, and the Royal Ballet School. Aisling recently wrote the score for the documentary film 'White Riot', which won the Grierson Award for Best Documentary at BFI London Film Festival 2019.

The talented artists put on a memorising performance for their sold-out Hackney crowd, playing tracks from their debut album Waves, each song offering its own unique sound with real emotion. Their chemistry as a duo was positively portrayed to the audience during the mind-blowing recital of their self-composed track 'Mulholland'.

It was when they performed their individualised version of London Grammar's 'Wild-Eyed', you really started to appreciate what Anna and Aisling are about as musicians and their strength as compelling performers.

AVA are fast becoming a force to be reckoned with and no doubt they with continue to break the boundaries of classical music, with their unique and potent blend of cinematic soundscapes, evocative and immersive electronic journeys.

Their debut album 'Waves' is out now on One Little Indian.