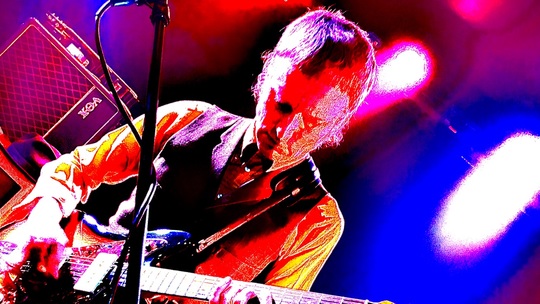 Superlatives were in unrestrained abundance for Micko and the Mellotronics’ seminal gig on Wednesday deep in the heart of rejuvenated but historically-seedy Kings Cross.

Having released their barnstorming debut but tongue-in-cheek single ‘The Finger’ two and a half months ago; they hammered home their their ambiguous yet uncompromising ethos with a white-knuckle-ride of a set festooned with chin-stroking pop culture references.

The Mellotronics are in their element in the scene-setting Water Rats: a TARDIS-like pristine venue with the DJ playing a veritable build-up soundtrack of Eno, Gary Numan, and early Adam and the Ants. The band comes on-stage to one of Micko’s favourite electronic composers Iso Tomita playing Debussy, and then all systems go!

They immediately launch into the shoplifting opus ‘Schesmos’. This is their most sublime version yet, honed from years of playing it live. The dual rhythm and lead guitar attack of of Micko Westmoreland and Jon Klein - formerly of Specimen and Siouxsie and the Banshees - gives it a spacey otherworldly quality coupled with an almost howling resonance. The Roky Erickson meets 60s spy theme ‘Psychedelic Shirt’ has a screeching swirling omnipresent riff courtesy of Jon - playing with his eyes closed in the vicinity of his Stratocaster’s cutaway.

The abrasive ‘The Now’ has a pummelling Can-like bass line provided by Vicky Carroll, and is a vortex of a song with a level of extreme intensity, pulling you in, and at the same time definitively establishing the Mellotronics’ wholly cinematic stage presence. Jon and Micko are the perfect counterparts towards each other: redolent of Strummer and Jones in their prime. And Jon plays with chiming fluidity not unlike Jonesy.

Predictably enough, the set is not without its show-stoppers. The first being ‘You Killed My Father’ which conveys a distinct change of tack towards Byrds-like arpeggiated overtones. The audience sings along to this epic number, and drummer Nick Mackay thrashes out his Bonham-like intensity during the song’s rousing chorus with gusto. The second is undeniably the aforementioned ‘The Finger’ which contains a delightfully snakey ‘Town Called Malice’ bass strut amid a preying ‘White Light/White Heat’ intensity. It has an unabashed arrogance of its own. The perfect calling card not to be messed with.

Their penultimate number is the NYC-centric ‘Halycon Days’. This song could easily be interpreted as a homage to the stomping ground of their key influences. Intense downstrokes of the kind formerly a trademark of Johnny Ramone and David Byrne prevail and seal the deal. In all my decades of pouring over countless ‘best of’ lists; I have yet to see one devoted to ‘Best British Rock Songs About The Big Apple’. But when such a list appears, ‘Halycon Days’ will be up there with ‘New York’ by The Sex Pistols and ‘Back In NYC’ by Genesis.

The Mellotronics’ set ends on an aesthetically bathos-like note with ‘Imelda’: all about The Beatles’ infamous 1966 faux pas towards she of the large footwear collection. Micko takes centre stage and screams the eponymous refrain which refuses to falter. There has never been such an original song like it. Inspiration certainly comes from unexpected sources.

It is time to call last orders on a decade that has been wholly defined by the insipidity of talent shows, streaming and chinless wonders. The Mellotronics have shown that there is a ‘proper’ new decade just round the corner what with their forthcoming single and album releases. The 20s will be roaring, and theirs for the taking.