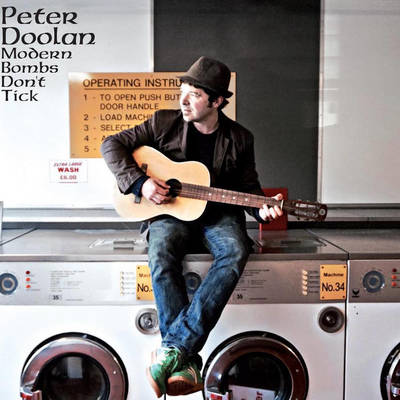 Peter Doolan looks like being one of those names to watch in 2020. He’s putting the finishing touches to his debut album as we speak, which is set for release sometime this year, and is also getting out and about on the London circuit with a live show that features a rolling lineup of collaborators including the much trumpeted Gabi Garbutt on bass and drummer Nick Mackay of Micko & The Mellotronics and Barricades fame.

His five track ‘Modern Bombs Don’t Tick’ EP, released last month, collects a host of former singles and one new spoken word track, presumably designed to showcase both sides of this talented poet and musician. His style, probably best summed up as ‘punk folk’, reflect his roots growing up in Ireland – there’s a healthy dose of the anarchic revelry of The Pogues here, but also the Waterboys and Sinead too – as well as the influence of classic acts like Bob Dylan and The Clash. Mumford and Sons this most definitely ain’t!

‘Sons of Immigrant Blues’ is the perfect introduction, the expletives flying over almost bluegrass picking, talking about ripping up Cromwell’s grave one moment, unashamedly poetic lines about the moon the next. It’s fast, breathtakingly energetic, violent and beautiful all at the same time, and the video, shot in Highgate woods, is both hilarious and poignant at the same time.

‘Leonard My Dear’ and ‘Dig Paddy Dig’ have a sadder, more melancholy feel to them, the former about Irish immigrants on the verge of self-destruction in London, the latter a moving portrayal a wreck of a man hanging off a bar stool in South Harrow painted as fiddles and guitars search out heart tugging, criss-crossing melodies.

The EP’s title track is raw spoken word, intimate and thrilling and funny, a breathing space of sorts before ‘Fulacht Fia’ rounds things off in anthemic style, an exhortation to revolution you can just imagine moshing crowds losing their collective shit to. “Tonight’s the night we revolt” he whispers in our ear. and to paraphrase the Sex Pistols, he means it man.

Roll on the debut album, say we, but in the meantime get stuck into these superb introductions to someone who will surely be making an indelible mark on the music scene this year.