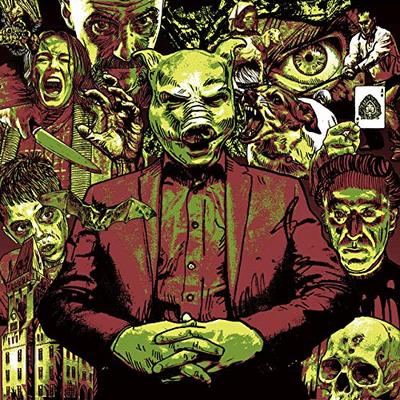 It is hard to know what to expect before listening to new album ‘Soundtracks’ by Goldbringer. With a whole host of diverse influences to draw upon you might think it could make it a hard listen but it actually works. And magnificently too.

Goldbringer is the brainchild of Ben Honebone, lead singer of prog-metal band Malum Sky and self proclaimed ‘Welsh renegade electro-prog-pop-experimentalist.’ With first single ‘What’s Your Location Bro?' getting positive reviews from fans and critics (and indeed my good self) it is no wonder it's also the opening track. The synth-laden soundscape it creates really sets the tone for the rest of the album.

‘Theme from 1987’ is an instrumental and one of the stand out tracks for me. Imagine Crystal Method and the Red Hot Chili Peppers had a love child after a nice chilled evening drinking wine and this would give you a good idea of what this sounds like.

What I like about this album is uncertainty of the journey the listener is going so when the swing fusion of track ‘Such a good boy’ drops into my headphones complete with Bowie-esque vocals takes me by surprise. And after a few listens is one of the stand out tracks on the album.

The album features over 50 mins of expansive soundscapes and catchy beats produced by Ben and mixed and mastered by fellow South Wales artist Minas. The album’s offering of 'electro-prog-pop' presents Goldbringer as synth-pop Warlock who is able to mix a whole slew of influences to great affect most notable on instrumental Le Porte Dell’inferno.

For me, the world has been aching for an album like this. A soundscape of majestic triumphs unafraid to push the envelopes of style.