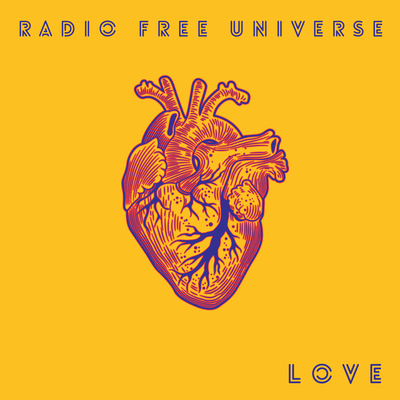 Radio Free Universe aka RFU, is a multi-genre crossing indie rock force. The band was originally founded back in 2010 and have since established themselves as a premiere act throughout Canada, now they are poised to take on the rest of the world with their new album 'Love', and truly what the world need now is Love sweet love.

Throughout the new album the band manages to deliver texturally rich rock and roll, with an almost astral feeling, listen closely and feel your soul magically being lifted by the innovative and melodic music.

'Love' embraces both dark and light, while genre hopping and delivering, spirit, heart, and soul while still being on the cutting edge. Made up of well-composed songs, the album contains an amazing amount of genre diversity as well as tidbits of experimentation without every elongating any one section or theme unnecessarily. Each song stands out in its own way, with no two sounding completely alike. The album is brilliant musically throughout, with deep, poetic lyrics and it nicely straddles the line between many sub-genres of rock n’ roll.

The album starts strong with “Love Right Now,” an upbeat and catchy rocker. The edgy verse builds to a chorus which flows smoothly helping to set tone for the album. Followed by the hallucinogenic vibes of “Star Child” and the layered textures of “Circle.” While “She’s High Again,” “Even Angels,” and “Divided We Will Fall” are filled with singalong harmony. There is not a song you won’t like in this eight-song set.

The band embraces a hip, classic cool rock sound on the emotionally charged “Love”. Rock n’ roll, funk, indie rock, pop, all merging together into a singular and satisfying whole.