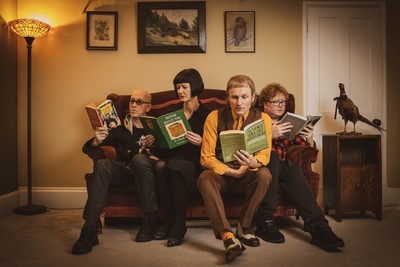 The second single from Micko & The Mellotronics was penned about singer/guitarist Micko Westmoreland's run ins with persistent complainers in the North London housing co-op he lived in. But in recent days it's definitely on a new meaning.

Indeed, with the country - and in fact most of the world - living under lockdown, we're all getting to know our 'Noisy Neigbours' much more intimately than before. The song has some truly hilarious lyrics - the "unbecoming slapping sound" being one of this writer's faves -and is delivered in the kind of frantic, wired (even Wire-d possibly) post-punk fashion that the four piece has been cementing with a tireless schedule of gigs recently.

Micko's trademark has been to create a succession of distinctive videos using the skills of UK comedy greats like Kevin Eldon and Paul Tuner of Little Britain fame. This time he turns to Suzy Kane - I.T. Crowd, Saxondale and a host of other things - to become the put upon neighbour driven to distraction. The joke is, of course, that there are no neighbours - it's all happening in her head.

Which is something worth bearing in mind in these times of living on top of each other. Perhaps the creeping paranoia and lack of perspective are all of our own making? Maybe, maybe not. You'll have to decide, for yourself.

The digital single is released via Landline Records on April 17 although sadly the vinyl version - which also features the late Neil Innes on b-side 'You Killed My Father' - has been put back to June 27 due to the total shutdown of record shops everywhere. '