The Killer LA Supergroup That Never Was 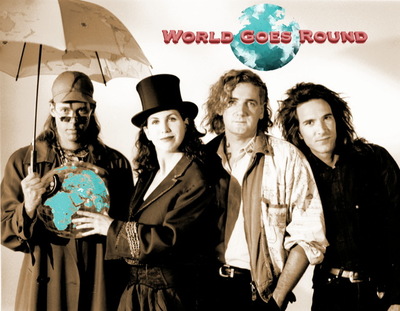 It's 1989 in Los Angeles - four friends create an album which will only resurface this year. The first single taken from this album is infectious pop rock track ‘Big House’, out this May 29th!

Who exactly are the mysterious World Goes Round?

About thirty years ago record producer Tommy Vicari (Taste of Honey, Billy Idol, Prince) recorded and produced an album with Frank Musker, Elizabeth Lamers, Jeff Hull and Marty Walsh – four good friends who were hot songwriters, singers, and musicians working at that time in the LA music scene of 1989. They called themselves ‘World Goes Round’. Between them they had either written for, sung with or played on records by a string of major artists and producers like Linda Ronstadt, Queen, Chaka Khan, Brenda Russell, Jeffrey Osborne, John Denver, Supertramp, John Fogerty, Quincy Jones, Arif Mardin, Air Supply – the list is too long to quote in full.

This is a killer single which has an uplifting energy and cool original-80’s vibe. It’s filled with funky melodies and very poignant lyrics. A bunch of ridiculously hedonistic people live it up in a big mansion high on a hill, while down below the world is burning and choking on filthy polluted air.

‘So we do the dance - take it for granted. You tell the truth - they don’t understand it.’ After visiting the Amazon in Peru, Brazil and Venezuela, vocalist Frank Musker had seen first-hand the damage caused to the Amazon by the greed of the West. Hence the line ‘In the time it takes to sing this song, another thousand acres will be gone.’

At the time ‘Big House’ was written in the 1980s, it was a couple years before the Berlin Wall came down and the concerns of refugees fleeing from behind the Iron Curtain is also voiced in the song: ‘Well there’s a man in East Berlin, all he wants is a ticket on a westbound train.’
It is poignant that a song written three decades ago sheds light on precisely the same issues we face today - the refugee problem has only got worse, as has the vast destruction of the Amazon.

In fact, ‘Big House’ feels even more relevant now than it did then, because of the likes of Extinction Rebellion, David Attenborough, Greta Thunberg etc. Only now are people really starting to take note as these issues are in the mainstream of public and political debate.

This is really is an extraordinary case - an album record in 1989 heard for the first time today. Grab a slice of 80’s rock pop when the first single ‘Big House’ drops this May 29th! We can’t wait for the album too…