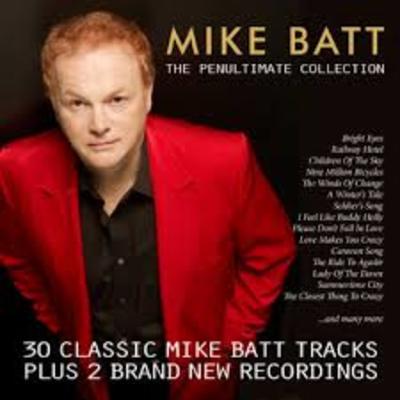 Mike Batt has been one of my favourite songwriters since I first heard ‘The Wombling Song’ as a child and played my first ever cassette ‘Keep on Wombling’ to destruction! That he has never received his due from the British public is entirely due to that association and its attendant musical snobbery. His cleverly named ‘The Penultimate Collection’ is a perfect opportunity for this musical maestro to get his proper due from the music lovers of the UK.

The album starts with ‘Children of the Sky’ from the musical ‘The Hunting of the Snark’. Having never listened to any of the songs from this play I am really impressed with this track and definitely want to listen to more of the musical. It is a reminder, if any were needed, that Batt’s ear for a tune is pretty much without parallel for such a long career. Where many writers have had dipped into their creative well and found it coming up dry, but he can go back to the well time and time again and find something refreshing and different.

The next track is ‘Bright Eyes’, made famous by Art Garfunkel, from the soundtrack of Watership Down. The quality of Batt’s voice is undiminished by age, although it has a different, more wistful, quality from that of his earlier days. The next few tracks ‘Winds of Change’, ‘Lady of the Dawn’ and ‘Railway Hotel’ are all over 40 years old, but they still sound incredibly fresh.

‘Imbecile’ featuring Roger Chapman is another song from the 70s featured originally on his album ‘Mike Batt and friends’. ‘Please Don’t Fall in Love’ is a gorgeous ballad which was originally a hit for Cliff Richard and, once again, it sounds the perfect fit for Batt’s slightly more melancholy voice. ‘Love Makes you Crazy’ is the final song of this run of more unfamiliar tracks and it is unmistakeably 80s in style with a Buggles style tune.

One of my favourite songs of Mike Batt’s whole career is the sublime ‘A Winter’s Tale’ originally taken to Number 2 by David Essex in 1983 and firmly established as a Christmas classic. Once again Batt takes the song, sings it beautifully and gives it a very different feel.

‘Soldier’s Song’ from 1988 is one of those songs from his career that is bafflingly ignored. A story song dealing with a soldier’s final night of love before heading to war. The lyrics are incredible and the tune is powerful and beautiful. It is a real standout from even this exceptional set of songs and deserves to be far better known. ‘Better than a Dream’ might be more familiar from his protégé Katie Melua’s version but as ever Mike Batt takes on the song with confidence and gives it a new feel. ‘Into the Sunset’ was a duet from 1992 with Bonnie Tyler and is a real undiscovered gem. ‘Closest Thing to Crazy’ is one of the most amazing songs even he has written, and along with ‘Nine Million Bicycles’ showed how incredibly well he understood Melua as an artist.

‘Caravan Song’ as sung by Barbara Dickson is one of my all-time favourite songs and performances. Batt’s version loses very little compared to that version as his voice just floats above one of the most beautiful tunes anyone has ever written. ‘I Feel Like Buddy Holly’ was a big hit for Alvin Stardust and is a perfect example of Batt’s mastery of lyrics. ‘Waiting for a Wave’ is a song I had never heard, but it is two minutes of wistful lyrics over a gorgeous string accompaniment and reminds you that if you dig into his career there are jewels to be found everywhere. The track ‘Six Days in Berlin Part 1’ is the first movement of six in a rock symphony that he recorded with the Berlin Philharmonic Orchestra and is a tour de force of different influences coming together to create an amazing whole. ‘Tarota’ is another instrumental track from 1979’s ‘Tarot Suite’ that shows a similar mastery of the rock symphony form. ‘On Watership Down’ and ‘The Fires of Rabat’ complete this superb quartet of instrumental classics. For those of us of a certain age the opening chords of ‘Summertime City’ brings back a rush of memories as we’re back in the 70s watching BBC1 on a Saturday night!

The only cover version of the entire collection is a single from 1969, Lennon and McCartney’s ‘Your Mother Should Know’. It is a clever rearrangement, but it is nowhere near the best song on this collection, musically or lyrically, which really flags up the quality of Batt’s output. There is an interesting version of ‘Run Like the Wind’ with Roger Chapman, but there is no competing with Barbara Dickson’s sublime treatment of the lyrics.

Yes, it’s The Wombles, the double-edged sword of Mike Batt’s career! The songs are incredible in their own right. ‘The Wombling Song’ still makes me feel like I’m 8 or 9 years old again, and the Western pastiche of ‘The Orinoco Kid’ and the beautiful classic feel of ‘Minuetto Allegretto’ are just sublime. If you were a child at the time, The Wombles introduced you to virtually every style of music and for me at least completely set my musical tastes. The perception of them as ‘kid’s music’ is just so wide of the mark it’s incredible, but it is the reason why Mike Batt has never received his due as one of the finest songwriters of the last 50 years. ‘The Walls of the World’ is another tune that Katie Melua fans would recognise immediately and, as ever, Batt finds something different. The final track in this astounding collection is ‘The Vanishing’ from 'The Hunting of the Snark’, reminding me once again that I really need to take a proper listen to it.

Mike Batt is quite simply a genius and should be acknowledged as a giant of modern popular music. Listen to this collection without prejudice and you will realise that virtually no one else can match this level of quality over half a century of songwriting.