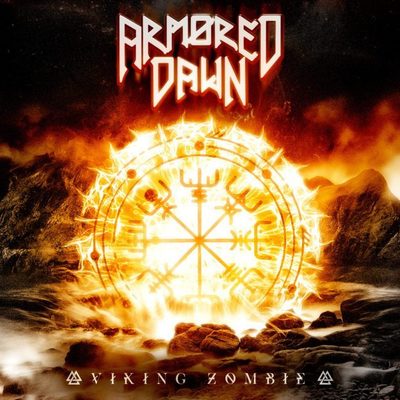 For me, the mention of Brazilian metal and my thoughts automatically got back to my childhood and listening to Beneath the Remains, Arise, and Chaos AD by legends Sepultura.

But with Armored Dawn, the Brazilians from Sao Paulo are tipping their hat into Viking metal and new album 'Viking Zombie' is quite literally a stormer. You may question what connection could there possibly be between the South American rainforest and the icy lands of Scandinavia, but the tale of brave warriors, brotherhood, and epic battles know no geographical boundaries.

The deluxe edition comes with three bonus tracks and as a package works well. Tracks ‘Ragnarok', 'Heads are Rolling' and particularly 'Animal Uncaged' are primal foot stompers. All have a rumbling grove and a call to arms with a beer in hand.

Stand out moment for me is track ‘The Eyes of the Wolves’. This has a slower groove and the double kick drum is just badass and reminds of something that would sit quite comfortably on an Amorphis record. The band show their skills throughout, musically, compositionally as well as dipping their toes into a bit of experimentation with newer sounds that gives some of the tracks a more polished cleaner sound.

Despite the name of the album, this has a strong Power Metal vibe to it akin to bands like Dragon Force, but it offers a modern version of Power Metal. Especially the riffing is well-done, delivering heaviness as well as melodies and it just ends being great to listen to.