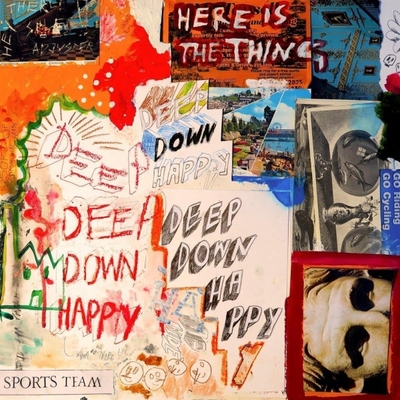 Sports Team are a six-piece band comprising lead singer Alex Rice, guitarist and songwriter Robb Knaggs, guitarist Henry Young, bassist Oli Dewdney, keyboard player Ben Mack and drummer Al Greenwood. They all met whilst studying at Cambridge University. Although, like students everywhere, they hail from a variety of different hometowns, their shared viewpoint comes from their suburban upbringing. Don’t make the mistake that they are just going to appeal to a middle-class audience though. Their attitude, their songs and above all their sense of fun will bring anyone who likes good music on board. They put together clever lyrics with infectious music in the same way as Pulp did in the 90s, and I have a feeling they will have just as much of an impact. ‘Lander’ just explodes out of the speaker with a punk rock guitar thrash before moving into a sardonic takedown of the boredom of English middle-class life. It doesn’t sound much fun when it’s a choice between Wetherspoons or the Slug and Lettuce, but as Sports Team say, ‘if you want jobs you can always go to London’! ‘Here it comes again’ reflects on the boredom of everyday life and the way that it just leaves you with an uncomfortable feeling ‘like a burning British neck on an August evening’ which is a priceless image. ‘Going Soft’ is another amazing track that positions Sports Team in the tradition of The Kinks, Squeeze and Pulp as chroniclers of British life seen through the lens of insiders who don’t really buy into it. ‘Camel Crew’ tells the story of social climbing with a certain amount of detached admiration and has hints of Pleasant Valley Sunday in their lyrics when they sing about a place ‘ Where the steps are swept, and the lawn is neat. The flowerbeds shame the neighbours’. The juxtaposition of the punky tunes with the insightful, affectionate and very amusing lyrics really make Sports Team a band unlike any of their contemporaries at the moment. ‘Here’s the Thing’ trots out the old platitudes about how hard work will help you get by and how you can trust a man in a suit and tie then reminds you that it’s all lies. The subtext is clear. Those lies are there to keep you in your appointed place so ignore them and go your own way in life. ‘Long Hot Summer’ reminds you of the decisions you make in life that leave you in a situation when there’s nothing there for you even though you thought it was the right thing to do. The end of the first verse sums it up as ‘Like wearing fives when you’re a size six’ which I’m pretty sure everyone can relate to. That’s their secret, I think. They write lyrics that sound like those that anyone could write themselves, but if anyone else tried they would end up with something that stays on the page rather than jumps off of it. ‘The Races’ talks about the thinly veiled prejudice of the crowds you see at Epsom or Ascot in the bars and restaurants. The anti-hero of the piece is ‘a horrible man. He’ll never buy a drink, but he’ll let you know he can’ who wears the Union Jack and displays the attitudes that sadly often go with that. ‘Born Sugar’ takes a swipe at the attitudes of the rich who segregate themselves from all but the right type of people and congratulate themselves on having done so. ‘Fishing’, possibly my favourite song on the album, talks about that time when you are growing apart from your old friends and you realise that this is happening when ‘We won't laugh anymore 'cause we don't joke anymore’ and they tell you that if the band doesn’t work then you can ‘get a regular job’. It reflects the time in your mid 20s when you realise that a shared history isn’t enough to keep a friendship going. ‘Kutcher’ is a song that goes down really well live with its final refrain of ‘I just wanted to be your mid-noughties MTV star’. ‘Stations of the Cross’ must be the only song I can think of that references a religious tradition and it gives you a sense of the breadth of their lyrical influences. In a final swipe at the type of social climber they know so intimately they reflect that you can ‘Dye your hair, and whiten up your teeth. No, no one really cared for what was really underneath. It's all the same, just sycophants and creeps and they're not really happy’. That track ends a stunning debut album that is as lyrically brilliant as anything I have heard in years. This band really must become household names or there is no justice. Buy the album and, when life returns to normal, go and see them live as this is one Sports Team that the whole country can get behind.