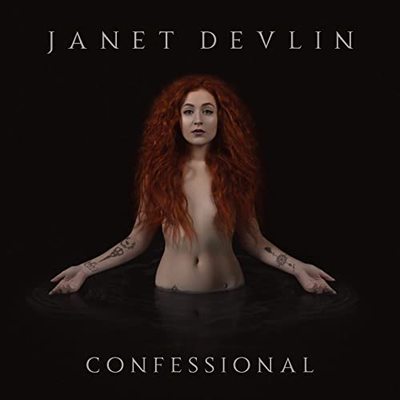 Janet Devlin is an artist who some people first heard of via the X Factor, but if you did you should ignore everything you heard then and prepare yourself for an album unlike any other this year. It is brave, confrontational and demands that you listen to every word.

'Confessional' starts off with the title track, a defiant cry from the heart that acknowledges her mistakes with blistering lines like, ‘Hiding six feet under has always been my way’. So Cold is a heart-breaking track that is probably the most honest and perceptive explanations of depression ever set to music. 'Saint of the Sinners' starts with a gorgeous solo on the violin and becomes a passionate denouncement of the person who ‘Let me drown in holy water. You let me fall on holy ground.’ This is a song full of anger against those who made life far more difficult than it should have been, but she has taken her revenge by singing again. It is an incredibly powerful message.

'Cinema Screen' is a song most of us can probably relate to as she tells us ‘I've been laying wide awake. Watching every last mistake I've ever made on a cinema screen in the back of my forehead’. The song swells subtly as she promises herself that she will move on from this Hollywood dream and start again. ‘Speak’ is a devastating song that describes an assault and tells the perpetrator ‘Oh Danny Boy, oh how I trusted you.’ It is an incredibly difficult listen that made me angry and sad, but her bravery cannot fill you with anything other than admiration and hope for her future.

'Honest Men' is a tale of a young pop star being used up and thrown away by an uncaring industry which made her realise that ‘My soul wasn't enough you want it all, you wanted blood’. 'Love Song' talks about only being able to write about love if you have truly experienced it. As with every other song on this album it is unashamedly straightforward expression of the truth. You know that every single song is grounded in her experiences and that is what gives the album its power.

When you hear ‘Big Wide World’ it gives you a rush of joy, not only because it is an intensely positive song, but because it shows that Devlin has started to recover from everything she has gone through and is determined that she is going to ‘live life loud’! ‘Away with the Fairies’ by contrast is a whimsical song that has a darker undertone saying that the experiences that she has been through will always be with her and, at least for now, will affect the way she reacts to life.

‘Sweet Sacred Friend’ has an echo of Jolene in Devlin’s voice and the country inflection of the verses and is a song about a friend she has lost but who, before they left, helped her move on. It sounds like a tribute at first but when you listen to the lyrics a darker truth emerges.

‘Holy Water’ is not just my favourite song on the album but one of my favourite songs of the year. It is an uplifting gospel track that is like the emerging of a butterfly from its chrysalis. The final track of this incredibly brave album is ‘Better Now’. In it she acknowledges the fact that she has suffered a lot in the last few years but she is able to say, ‘Can you hear me now? I’m better now’.

This is truly a one of a kind album that announces the arrival of an artist with a unique voice. She has bared her soul and given everything she could to the album, but you know that she has so much more to give in the future.